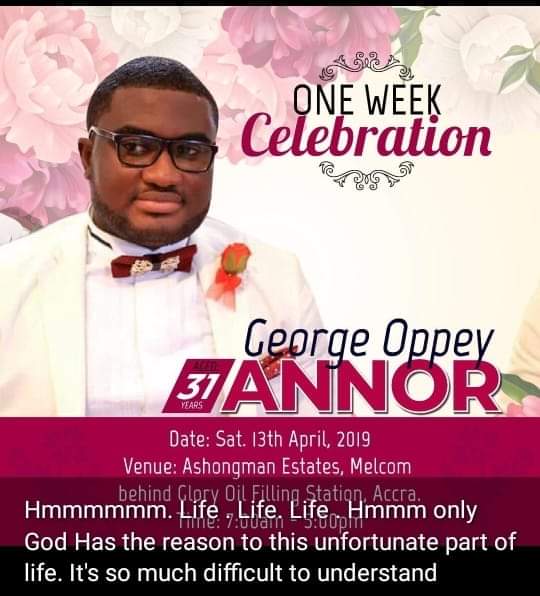 The family of George Oppey Annor, a 31 year old senior cadet recruit of the Customs Division of the Ghana Revenue Authority who collapsed and died while undergoing pre-arrival drilling alongside other colleagues at the GRA Training Academy at Kpetoe in the Volta Region will hold his one week celebration on Saturday, April 13, 2019.

A video on the drilling of the senior cadets went viral on social media, sparking public uproar and condemnation.

A report on the incident issued by the Kpetoe police in the Volta Region and intercepted by BestNewsGH.com indicates that the deceased together with his colleague senior cadets arrived at the GRA Training Academy on March 31 2019 and as part of the process of initiating them into the Academy, collapsed in the course of the ‘drilling’ and was rushed to the Kpetoe Health Centre where first was administered on him.

According to the report, Senior Revenue Officer Benjamin Kwasi Fufagbi of GRA Academy, accompanied by Assistant Commissioner Appiah Waden Junior also of the Academy who reported the death of the deceased to the police were asked to take him to the Volta Regional Hospital for further treatment.

Senior Cadet Oppey was pronounced dead on arrival at the Volta Regional Hospital.

‘’Police visited the mortuary at the said Hospital and inspected the body of the deceased on the slab and observed that there were fresh wounds on both knees of the deceased’’ the report said.

Police Inspector Gesuorkong Joseph who is incharge of the inquest into the death of deceased said in the report that the body will later be sent to the Police Hospital for an autopsy to be conducted.