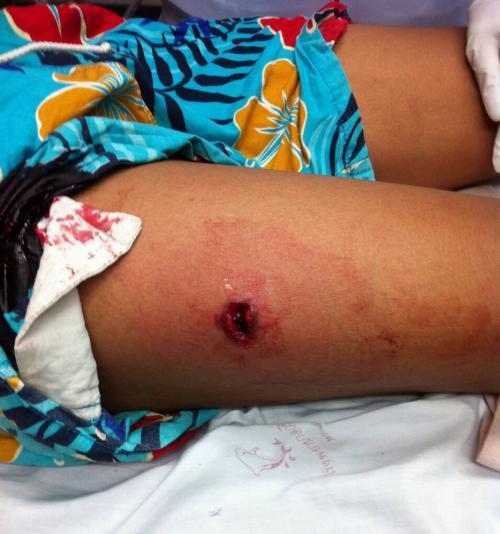 One Ghanaian has been shot in West Hills a suburb in Johannesburg province in South Africa last night in a fresh attack.

He was shot in the leg when violence erupted between some South Africans and foreigners in the area.

Speaking on Okay FM’s ‘Ade Akye Abia’ program, Chairman of the Ghanaians Association in Kempton Park Johannesburg, Wofa Atta explained that they received a report of the attack Wednesday morning.

“However, I can confirm that he is in a stable condition and is also receiving treatment,”  he said.

He explained that he was shot in the leg but currently a Ghanaian team has been dispatched to the area to assist him.

He, however, added that police have been able to bring the situation under control but cautioned Ghanaians in any other province to contact their various groups or the Ghanaian mission when there is an attack in their area.

The government of Ghana should also get in touch with the government of South Africa to ensure that total peace is restored to enable them to continue with their daily activities.

The government has been urged to break ties with South Africa after another round of xenophobic attacks on Africans has left five dead and several shops torched.

The statement signed by Fighter-General Hardi Yakubu said a break-off with the South African government will “force them to do the right thing.”

The Nigerian government has summoned the South Africa High Commissioner while Zambia has warned truck drivers who work in the country to stay away.

Joining in the condemnation, the Economic Fighters League said the South African government ‘continues to deny the existence of the problem’.

South Africa’s Police Minister, Bheki Cele, said on Monday that, “criminality rather than xenophobia” was to blame for the “senseless violence”.