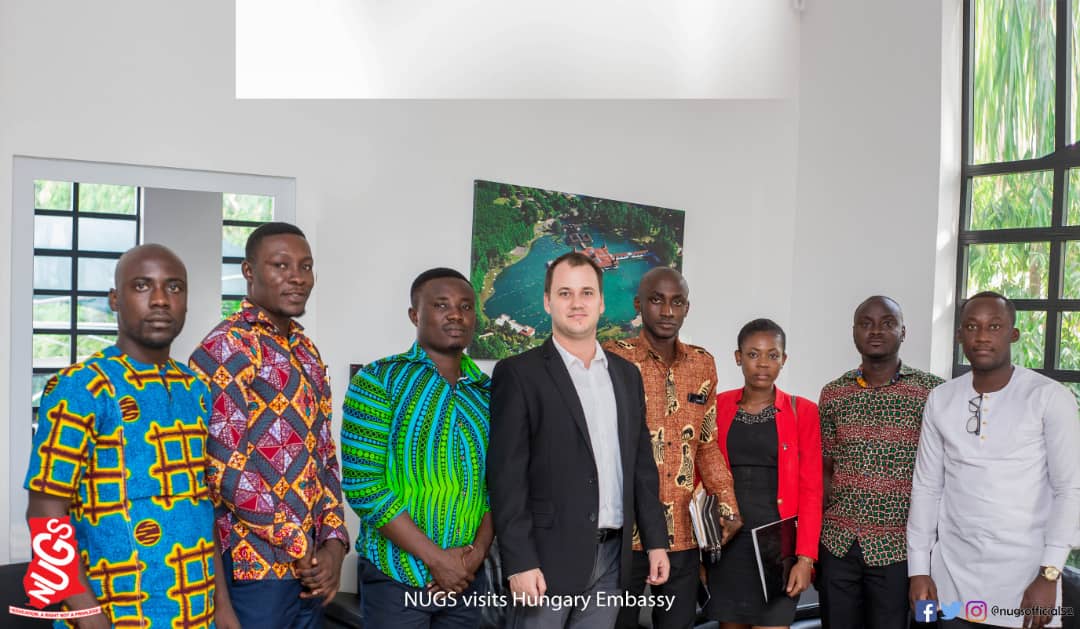 The National Union of Ghana Students (NUGS) says as part of measures aimed at addressing the challenges being faced by Ghanaian students in Hungary, it has met officials of the Hungarian Embassy in Ghana to discuss the issue extensively and find a solution that will help alleviate the plight of the students.

The move was also to ensure that a solid relationship is developed between the students and the Embassy so as to allow for seamless, fluid and uninterrupted flow of support for the students.

A statement issued by NUGS a while ago and signed by Eunice Garibah, International Relations Secretary and Tinkaro Asare Osei, president, said the NUGS delegation was met by the Deputy Head of Mission at the Hungarian Embassy, David Bekessi, with whom they discussed the matter.

‘’ The Union, having had series of engagements with the Ghanaian students in Hungary, is determined to further enhance the relationship between the two governments to the benefit of more Ghanaian students. The Embassy also finds it important to make sure that the students are further involved in the bilateral activities in their study-related sectors’’ the statement added.

The National Union of Ghana Students (NUGS) has  paid a working visit to the Embassy of Hungary to Ghana,  to discuss comprehensively, the condition of Ghanaian students studying in Hungary and how the Union can better relate with them. The delegation from NUGS led by Mr. Tinkaro Asare Osei  was met Mr. David Bekesi, Deputy Head of Mission at the Embassy of Hungary.

The visit was necessary because there is a bilateral relationship between the Ghanaian and Hungarian Governments on education to fully fund fifty (50) Ghanaian students to study in Hungary annually. The contract was signed in the year 2016 and by far, one hundred and fifty (150) students have benefited, ranging from undergraduate to Doctorate degrees of which some have graduated. This year, fifty (50) more students will get the opportunity to study in Hungary as beneficiaries of the bilateral relationship existing between the two countries.

The Union, having had series of engagements with the Ghanaian students in Hungary, is determined to further enhance the relationship between the two governments to the benefit of more Ghanaian students. The Embassy also finds it important to make sure that the students are further involved in the bilateral activities in their study-related sectors.

The President of the Union, H.E Tinkaro Asare Osei in his speech commended the Hungarian Government and made mention of some of the feedback the Union has received from the students in Hungary. He further stated it will be in the best interests of the Union for both governments to increase the number to a hundred (100) as H.E. Péter Szijjártó Minister for Foreign Affairs and Trade of Hungary projected for the year 2020 onwards. The Union is committed to engaging the Ghanaian Government to that effect in order to meet the requirements. Creating a magnificent relationship between the Union and the Ghanaian students in Hungary is again a topmost priority for this administration.

H.E Tinkaro lastly sought the help of the Embassy to help create a link between the largest student union in Hungary and NUGS all in the spirit of building quality student leadership through sharing the experiences and knowledge of leadership of both countries.

The Deputy Head of Mission, Mr David Bekesi was privileged to meet the delegation led by H.E Tinkaro Asare Osei, NUGS President and assured the delegation of the Embassy’s commitment to ensuring that beneficiaries of this educational opportunity are given the maximum attention and benefits they are entitled to. He further stated that their doors are always opened to assist the Union in communicating with the Ghanaian students in Hungary.

NUGS is always committed to helping students who would want to study outside our home country with the hope that after their return they will be successful builders and leaders of the Nation.