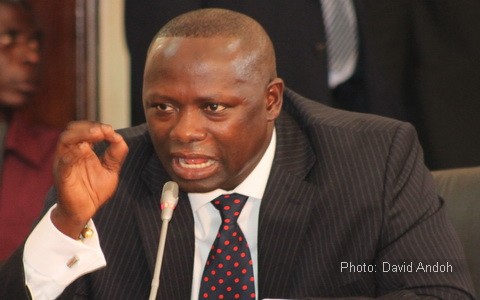 The opposition National Democratic Congress (NDC) Member of Parliament for Ellembele Constituency in the Western Region in a write-up on the subject says it is preposterous for the NPP to blame the NDC for the failures of the present administration in ensuring that the infrastructure to receive Gas is completed, which is critical towards ensuring a sustainable and reliable supply of power to the ordinary Ghanaian.

See his fill write up below.

The NDC government in a comprehensive effort to address Ghana’s energy challenge as well as address the issue of fuel security for our thermal plants embarked on the production of indigenous gas and initiated the no flaring policy.

After the successful completion of the Atuabo gas project, the next effort was the historic ENI’S OCTP project to utilize the associated and non-Associated Sankofa gas. This project represents a game-changer in the country’s gas-to-power ambitions with about 45,000 barrels of oil per day (bopd) and 180 mmscf of Gas, enough to generate 1000 MW of power daily.

The task then was to ensure that power plants were in place and ready to receive the ENI Gas. This culminated in the process of implementing an aggressive and well-coordinated programme by contracting Thermal Plants such as the Karpowership, Ameri, AKSA, KTPP aimed at utilising the anticipated Gas to be delivered from the ENI Gas.

Before the NDC left office we initiated processes to interconnect the Ghana National Gas Transmission System with the West African Gas Pipeline System part of the broader Long Term vision to ensure sustainable and reliable supply of Gas. This is to allow a reverse flow of gas from the West (Takoradi) to the East to serve power plants in the Tema enclave. This initiative received cabinet approval before the NDC left office. This was so critical to ensure that the ENI Gas was not stranded.

The NDC government also commenced the process of locating the 450MW Karpowership Badge to Takoradi to replace the 250MW Ship in Tema to off-take part of the Gas.

After two long years of inertia and procrastination, the NPP government has lost focus and failed to relocate the karpower badge to Takoradi. Instead this government has only been interested in changing Fuel suppliers with karpower and fruitless renegotiations.

It is therefore preposterous to blame the NDC for the failures of the present administration in ensuring that the infrastructure to receive the Gas is completed, which is critical towards ensuring a sustainable and reliable supply of power to the ordinary Ghanaian.

The Present government must take full responsibility and stop pointing accusing fingers at the NDC.

Ghanaians will not buy it.