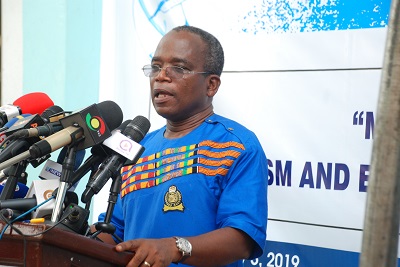 Chairman of the National Media Commission (NMC), Mr Yaw Boadu Ayeboafoh has called on journalists not to sacrifice others in the name of exercising freedom of expression.

He said “freedom without responsibility renders that freedom useless”, adding that while the nation was struggling to guarantee the safety and security of journalists, they should equally ensure responsible journalism so that their write-ups do not injure the psychological safety of others.

Mr Boadu Ayeboafoh said this at a stakeholders’ engagement and validation workshop in Accra on a proposed National Co-ordinating Mechanism on Safe and Responsible Journalism in Ghana.

The stakeholders’ meeting was organised by the Ministry of Information, in collaboration with the United Nations Educational, Scientific and Cultural Organisation (UNESCO), to solicit inputs on the draft framework and, subsequently, validate it, to ensure safe and responsible journalism in the country.

Mr Boadu Ayeboafoh was of the conviction that the framework would make media practitioners play impactful and meaningful roles in the development of the nation.

He acknowledged the role the Ghanaian media had played in strengthening the country’s democracy, noting that it had enabled the nation to achieve the longest constitutional regime since 1993.

He, therefore, urged the participants present at the meeting to make meaningful contributions that would ensure holistic implementation of the framework and also stand the test of time.

Mr Abdulourahamane Diallo, Head of Mission of UNESCO office in Ghana, said the United Nations held the right of freedom of expression in high esteem, and urged stakeholders to institute mechanisms to ensure the media contributed towards improving the nation’s democratic credentials.

He said it was a right enshrined in Article 90 of the Universal Convention of Human Rights and other international conventions which Ghana was a signatory to.

Therefore, Mr Diallo said, UNESCO, which has been mandated to promote human rights globally, would work to protect the rights of media freedom, access to information, and safety of journalists.

He said Ghana has ratified many international conventions on human rights and made tremendous efforts in promoting human rights over the years; however, the annual reports on the state of media freedom in the country is not encouraging, with crimes against journalists.

Mr Diallo cited the gruesome murder of Ahmed Suale of Tiger PI, and said UNESCO endorsed the investigation into the case to ensure that the perpetrators of such a heinous crime were brought to book.

He said safety and security of journalists globally required concerted efforts by all stakeholders, and lauded Ghana for the initiative to create safe environment for journalism practice.

Mr Diallo outlined various programmes UNESCO had initiated over the years to safeguard the safety and security of journalists worldwide and promote freedom of expression in West Africa.

The framework on Safe and Responsible Journalism in Ghana highlighted four areas: ensuring intensive education for all stakeholders on their roles to ensure a safe and responsible media environment; ensuring proper framework that validates attacks and threats on journalists; and introduce interventions to prevent attacks on journalists and prosecute those who unleash violence against journalists; as well as institute a one-stop shop platform to provide accurate annual statistics on attacks, safety of journalists and complaints against media practitioners.