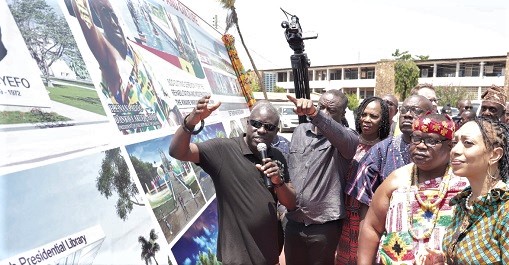 Work has commenced on the rehabilitation and modernisation of the Kwame Nkrumah Memorial Park in Accra.

Expected to be completed in nine months, the $3-million project entails the building of a new Presidential Library, a training centre, a new restaurant and a VVIP lounge.

Others are an artistic freedom wall and a music and light fountain to boost night tourism at the park.

Funding for the rehabilitation was provided by the World Bank under the Ghana Tourism Development Project.

Although the park is supposed to be a tourist attraction, maintenance of the facility has not been encouraging, resulting in its poor state.

On May 27, this year, the Ministry of Tourism, Arts and Culture closed the park until further notice for major renovation works.

During the launch of Destination Ghana, one of the government’s flagship projects in the tourism sector, in London, United Kingdom, on April 3, 2022, President Nana Addo Dankwa Akufo-Addo had announced that this year alone the government would spend about $25 million to upgrade some of the country’s iconic sites, including the Kwame Nkrumah Memorial Park.

Built in 1991 by the Jerry Rawlings-led Provisional National Defence Council (PNDC) government, the park, which sits at the Old Polo Grounds and covers an area of 5.3 acres, is where Ghana’s first President, Dr Kwame Nkrumah, flanked by his comrades in the Convention People’s Party (CPP) — Kojo Botsio, Komla Agbeli Gbedemah, Archie Casely- Hayford and Krobo Edusei — declared Ghana’s independence on March 6, 1957 before a huge ecstatic crowd.

It is the final resting place of the ex-President and his wife, Fathia Nkrumah, and hosts rare artefacts relating to Ghana’s independence.

The remains of the ex-President, which were originally interred in his home town, Nkroful in the Western Region, were moved to the mausoleum that was constructed at the park.

The Minister of Tourism, Arts and Culture, Dr Ibrahim Mohammed Awal, who cut the sod for the official commencement of work yesterday[July 19, 2022], said when completed, the project was expected to create an additional 50 direct jobs.

Furthermore, he said, it would help boost domestic and international tourism and improve the country’ rating as an investment and trade destination.

He indicated that tourism, arts and culture had the potential to contribute significantly to national development and job creation.

“It will further concretise the Pan-African Triangular Centre — the George Padmore Library, the W.E.B. Du Bois Centre for Pan-Africanism and the Kwame Nkrumah Memorial Park — thereby consolidating Ghana’s position as the foremost centre of Pan-Africanism and Diaspora research,” he said.

The minister gave an assurance that the works would be done expeditiously, so that the park would be opened by March 2023 to coincide with the country’s independence anniversary.

“The arts, culture and heritage must no longer be viewed as limited to the expression and display of customs, practices and values passed on from generation to generation but also seen as a powerful set of tools and forces of creativity, skills and talents with the potential to create wealth and prosperity that can bring about the realisation of economic power for the people,” he said.

Dr Awal indicated that prior to the COVID-19 pandemic in 2020, the Kwame Nkrumah Memorial Park was registering an average of 98,000 visitors annually.

“We anticipate that the number of visitors to the park will increase from the current figure to 400,000 after the rehabilitation.

This requires that we put in place a strategic plan to promote the park locally and internationally,” he said.

He said the launch of the Year of Return, Beyond the Return and Destination Ghana events helped to position Ghana as the destination of choice among the historical and African Diaspora.

He said with the easing of COVID-19 restrictions and the resumption of international travels, it was anticipated that the country would have about one million international arrivals this year, with a corresponding tourism receipt of over $2 billion.

The country, he noted, needed to have customer care orientation, which required that players along the tourism value chain be customer-focused to reap the benefits because “a delighted tourist, whether local or international, will not only visit again but also encourage others to visit”.

Dr Awal noted that since Ghana could not rely on the export of cocoa and gold alone to support national development, there was an urgent need to diversify the export earnings, saying in that case tourism and the creative arts came in handy.

The Minister of Information, Kojo Oppong Nkrumah, said the government, with the support of the World Bank, decided to undertake the rehabilitation of many tourist sites in the country, even in the face of global economic challenges, as a deliberate exercise aimed at achieving a specific purpose.

“Tourism is the third largest contributor to economic activity in Ghana. If people will get jobs and earn income, the third largest part of our economy that ensures that that happens is the tourism sector,” he added.

He said to ensure that the sector blossomed, it was important to invest in developing the infrastructure and sites to attract people from all over the world.

The Information Minister also used the occasion to charge the media to employ innovative programmes that would promote and market the newly refurbished tourist centres in the country to attract a lot more Ghanaians and people from around the world.

He said that had become necessary particularly as the COVID-19 pandemic negatively impacted patronage of the tourist centres and revenues that accrued to the state from the sector due to restrictions on mobility.

“To our colleagues in the media, our charge to you is that you develop innovative programmes that attract thousands of people, not just to this site, but the National Museum that was just refurbished and opened for example, and the many other tourist sites that we are investing in to bring a lot of Ghanaians and people from all over the world to visit these sites and together, we will be able to bring the Ghanaian economy back to where we want it to be,” he said.