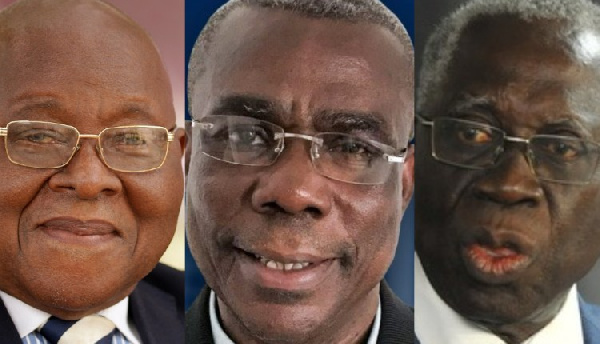 Investigations sighted by MyNewsGH.com has named three old men in the Akufo-Addo government for strategically placing their children and in-laws in key positions at the expense of equally qualified members of the larger tax-paying community.

The said investigations were made public by the opposition National Democratic Congress (NDC) Communications Officer Sammy Gyamfi. As promised, MyNewsGh.com is serializing the list of family and friends backed by evidence.

First, is Speaker of Parliament Prof Aaron Mike Ocquaye who after allegedly pushing his son to India as High Commissioner has also allegedly lobbied for his daughter, Maria Edith Ocquaye to be appointed Head of Corporate Affairs at the National Petroleum Authority (NPA). Also, Akosua Manu, daughter in law of Peter Mac Manu, Board Chair of the GPHA and Former Chairman of the NPP has also been appointed as Deputy CEO of the National Youth Authority in what NDC claims is pure family and friends government.

Mac Manu’s inlaw held the position of Deputy Communications Director at the Office of the First Lady from 2017 until her appointment at NYA, MyNewsGH.com learnt.

While all the other old men have been silent, Mr Osafo Maafo has come public to defend his boys.

He insists last year that his two sons working at SSNIT and NCA are occupying their positions by merit and not because of his stature and status in government.

“My sons are overqualified for the offices they are occupying at the moment. One of them was one time the only black Director of the HSBC Bank at the age of about 35 years, he was actually poached to come and do the work here and not just because he’s my child. He made first-class twice in Michigan in the US, he was given a job, he later said he was fed up with staying in America and so came back home to Ghana. He lectured at Ashasi University and you can ask Ashasi for his performance.

“…They advertised for the job at NCA and I think he topped the interview. No one should suffer because he’s the child of Osafo Maafo, if the person is good, he’s good. Why should it be a disadvantage to be an Osafo Maafo.”

“Kofi had returned home abroad after schooling and was looking for a job prior to his appointment at SSNIT, Kwadwo, until the advent of the Akufo-Addo government, was working as a Computer Science Lecturer at the Ashesi University College”, he insisted.