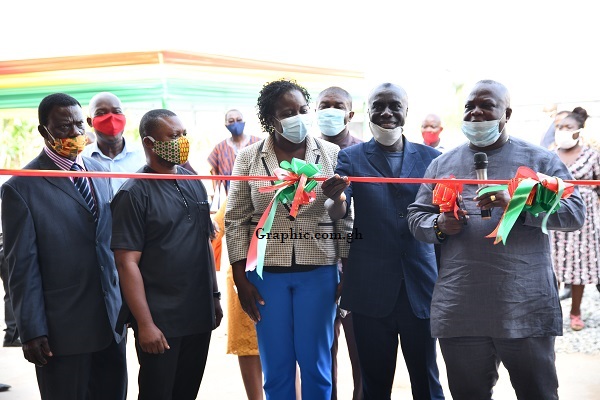 The management of the Intercity STC Coaches Limited exhibited great patriotism and leadership Wednesday when a former Managing Director of the company, Mr Samuel Nuamah Donkor, joined the current leaders to inaugurate a vehicle testing centre.

Uncharacteristic of the managers of state institutions, the current Managing Director of STC, Nana Akomea, ceded his frontline role at the event to Mr Nuamah Donkor when he decided to step aside for his predecessor to join the board chairman of the STC, Mr Samuel Oppong, to cut the tape to open the facility.

Although the testing centre initiative is a great move and should be the subject for discussion, the great reunion between the two leaders became the centre of attraction.

Mr Nuamah Donkor and Nana Akomea were seen engaged in a hearty conversation that caught the eye of everyone.

When he mounted the podium to address the gathering, the current MD paid glowing tribute to his predecessor and stated clearly that the project was the baby of his predecessor.

And when the time was ripe for the centre to be inaugurated, Nana Akomea stepped aside and requested that his predecessor joined the board chairman to cut the tape.

Dumbfounded at the real show of selfless leadership, Mr Nuamah Donkor lauded the current management of STC for being magnanimous in inviting him to be part of the inauguration of the facility.

“It is not easy for people to continue projects left behind by their predecessors let alone inviting them to be part of its inauguration. I am grateful for this gesture and I call on other state agencies to learn from this example,” he said.

This shows of leadership from the two STC MDs sends a strong signal to state institutions and politicians to learn from a good example and put the national interest first.