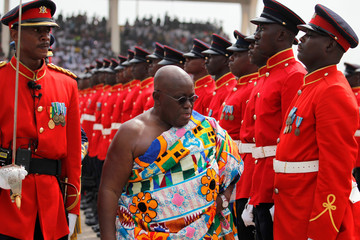 The Northern Regional capital Tamale will be the first to host the national Independence Anniversary Parade outside Accra, Media General can confirm.

The anniversary parade has over half a century been observed in the national capital Accra, but plans are currently afoot to hold the 63rd edition in Tamale.

President Nana Addo Dankwa Akufo-Addo hinted about the rotation of the national parade during the 62nd Parade Celebration in Accra.

Doubts were cast by many about the possibility of hosting such a big national event outside the corners of the Black Star Square in Accra.

But a team of government appointees from the presidency and some officers from the Ghana Armed Forces to Tamale visited Tamale to ensure that the event comes of smoothly.

The delegation was led by the Director of Operations at the Presidency Lord Commey. The Ghana Armed Forces team was made up of the Forces Sergeant Major, Chief Warrant Officer Ramous Barker, Warrant Officer II Fredrick Suuka from the Drill and Duty School in Teshie in the Greater Accra Region. They were joined by the RSM of the Kamina Barracks Senior Warrant Officer Ebeneku Godfred.

They inspected the Aliu Mahama Sport Stadium, the designated venue for the 63rd Independence Parade.

The GAF team had the responsibility of measuring and calculating the width and breadth of the designated parade grounds.

Though the team would not grant interviews, Media General sources said  the vehicle the president rides on during parade inspection would be airlifted to Tamale a week to the March 6, the day for the parade.

Ghana since 1957 has celebrated its independence on March 6 each year in remembrance of the toil of the founders and heritage of the forefathers.

The parade is marked with march pass by students, security officers, civil societies, business owners, and persons living with disabilities. There have also been lightening of the Perpetual flame, cultural and acrobatic displays among others to add colour to the celebration that signifies Ghana’s independence from the British.

Display of equipment by the various security forces and the famous gunshots salutes have also been part of the celebration.

Heads of state mostly from African countries have graced the parades of the years.