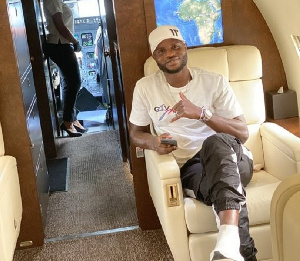 Ghana midfielder Mubarak Wakaso finally left Accra on Thursday to begin his career with Jiangsu Suning six months after he was supposed to have joined the Chinese Super League side.

The Chinese billionaire got their private jet and a special permission from the Ghanaian authorities to allow the midfielder to fly to start playing for Suning with the start of the season looming.

The Black Stars ace left the country on Thursday morning after as the outbreak of COVID-19 pandemic kept him locked in Ghana after he signed the bumper contract with the Chinese.

But government and airport authorities gave him a special dispensation to travel out of the country as Ghana has been locked to international travel since the outbreak of the pandemic.

Wakaso joined Jiangsu Suning Suning in the winter transfer window from Spanish outfit Deportivo Alaves, a move that shocked many following his form in LaLiga this season.

The 29-year old signed a three deal with the club, but following the spread of coronavirus in the Asian country, the midfielder had to stay in Ghana for over six months.

Reports in China indicates a drastic fall in the number of cases, allowing the return of normal activities including contact sports.

The Chinese Super League is yet to resume, however clubs have been given the green light to begin training which forced the club to find alternative ways to bring in their Ghanaian superstar.

Jiangsu Suning finished last season in fourth place, and the signing of the Ghanaian is expected to boost their title credentials for the upcoming campaign.

Wakaso spent most of his career in Spain playing for the likes Elche, Villarreal, Espanyol, Granada, Las Palmas and Alaves.

The nomadic midfielder also spent time with Rubin Kazan, Celtic and Panathinaikos out of Spain.

The tough-tackling midfielder has represented Ghana at the 2014 FIFA World Cup, as well as four Africa Cup of Nations tournaments.

In total, he has made 58 appearances for the Black Stars since making his full international debut in 2012 against Malawi in a 2013 Africa Cup of Nations qualifier.