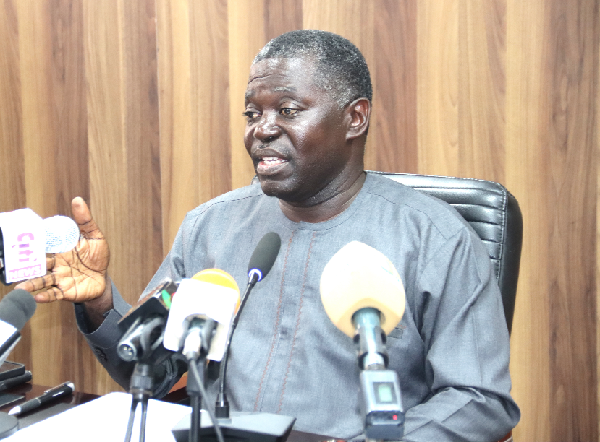 The Ministry of Lands and Natural Resources has stated that the Lands Commission rightly exercised its constitutional mandate to protect public lands when it demolished structures on state lands at Mpehuasem, East Legon in Accra.

The Deputy Minister in charge of Land and Forestry, Benito Owusu-Bio, explained that the demolition exercise carried out near Ideal College by Aynok Holdings Limited, a private entity, was legitimate because the company had been contracted by the Lands Commission to assist in the recovery and protection of all encroached state lands.

He stated this at a news briefing in Accra yesterday “to set the records straight” on the circumstances surrounding the demolition of some structures on public lands near the University of Professional Studies Accra (UPSA) last Friday.

He said the 22 plots of land being claimed by the proprietor of Ideal College, Dr Joseph Kobina Essibu, belonged to the state and would be duly reclaimed.

He stressed that the ministry would support the Lands Commission and its assigns to clear all illegal occupants of state lands within the area and other parts of the country.

In a bid to protect government lands, the ministry established a Public Lands Protection Team on September 6, 2021.

The Director of Operations at the Presidency and a representative of the Greater Accra Regional Coordinating Council were also part of the team.

The team was given the mandate to review the status of state-acquired lands to enable the government to make informed decisions on these lands.

It was also tasked to regularly survey and monitor public lands to ensure that they were free of any encroachment, and to facilitate the demolition of structures on behalf of public institutions when required.

“Currently, the team is working to secure the Ramsar Site at Tema, Dairy Farms at Amrahia, Pantang Hospital, the CSIR Animal Research Institute, Site for Accra Training College at Mpehuasem, which is the subject matter of the news conference,” he said.

The Executive Secretary of the Lands Commission, James Dadson, said the ministry contracted Messrs Aynok Holdings Limited to assist in the recovery and protection of state lands because the commission did not have the structures and logistics to protect the reclaimed lands.

“Lands Commission does not have a task force to protect reclaimed lands. We do not have the machinery, but Aynok Holdings has, so we contracted them to help us,” he said.
Giving a historical background to the East Legon state lands, he said the government compulsorily acquired 225.18 acres of land through Executive Instrument (E.I.) 72 of 1974 for Accra Training College at Mpehuasem.

He said following a memorandum of understanding in December 2008 with the pre-acquisition owners, the Djirase Family of La and Numoo Nmashie Family of Teshie, the government, in lieu of compensation, released 114.055 acres to the owners.

According to him, Accra Training College fenced off and occupied about 50 acres of the 111.125 acres retained by the government.

“Over the years, some unknown persons have resorted to alienating and developing part of the retained land outside the walls of the college,” he said.

He added that since 2010, the commission had given adequate notice to persons engaged in the encroachment activities, including Ideal College, and some churches of an impending demolition of illegal structures on the state lands.

Mr Dadson noted that in the case of Ideal College, Dr Essibu formally applied for the regularisation of two separate parcels of land within the enclave.

He said the two parcels were the present site of about 2.50 acres for the school with a hostel and the four plots proposed for the canteen.

“In addition to this, Dr Essibu is currently laying claim to additional 22 plots measuring 3.60 acres scattered within the area, some of which he has sold to other persons,” he said.