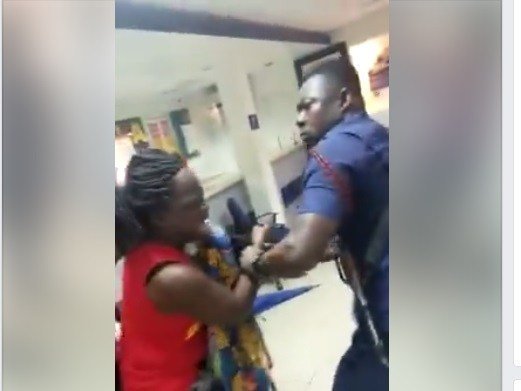 One of the lawyers of the woman who was assaulted at the Shiashie branch of Midland Savings and Loans has denied reports that the case was dismissed because the victim failed to appear in court to testify.

Samson Lardy Anyenini disclosed that Patience Osafo has not been informed of days the court will be sitting making it impossible for her counsel and her to show up.

He revealed on JoyFM/MultiTV’s news analysis program Newsfile, Saturday, that “all of that is actually untrue. The complainant has never been contacted and told of any court appointment date.”

The policeman who beat up a customer at the Savings and Loans Limited company, Lance Corporal Frederick Amanor Godzi, aka Skalla, was recently discharged by the Accra Circuit Court.

Godzi was charged with assault for allegedly beating Madam Osafo, on the company’s premises on July 19, 2018, when she went there to withdraw her money.

Also set free by the court are the three officials of Midland Savings and Loans who were standing trial for allegedly aiding Godzi to assault Ms Osafo.

The court presided over by Cecilia Dapaah Mireku, in December 2018 discharged the accused due to the lack of interest in the trial victim.

Madam Osafo is said to have failed to appear before the court to testify and also failed to avail herself to help the police with investigations.

But Mr Anyenini said this was not the case because all the five times there have been court sittings on the matter, Madam Osafo has never been informed.

According to him, the complaint has, therefore, filed a petition to the Attorney General to have the case relisted and “commit herself to show up in court.”

He said the AG has been petitioned to change whoever is going to prosecute.

Commenting on the issue, Editor-in-Chief of the Crusading Guide newspaper, Abdul Malik Kweku Baako said, “we should take another look at those who handle the prosecution.”

He wants them to be brought “under the radar and examined critically if indeed they did anything to undermine prosecution.”

Mr Baako wants the police to come clean and look at who is going to prosecute so it won’t look like they are doing a shoddy job to save one of their own.

The veteran journalist does not want the case to be limited to inter police discipline measure.

“We need to build a culture of deterrence for people in uniform not to think that they can take the law into their own hands,” he said.