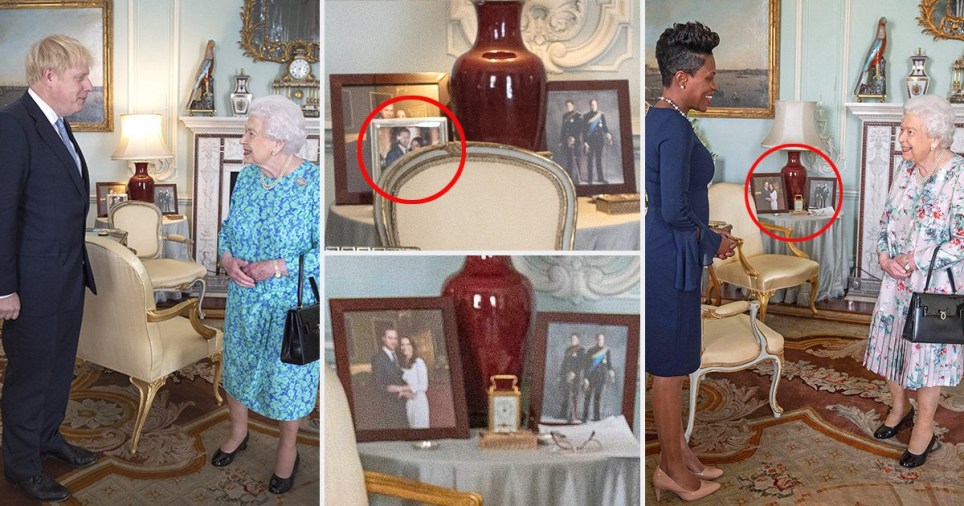 New pictures reveal that a framed portrait of the Duke and Duchess of Sussex displayed in Buckingham Palace has mysteriously disappeared.

The picture of Harry and Meghan took pride of place alongside a portrait of William and Kate and the two brothers together in military uniforms in the Queen’s audience room at the palace.

It was on display in July when the Queen appointed Boris Johnson Prime Minister, positioned in front of the Duke and Duchess of Cambridge’s photograph. But when Her Majesty held a private meeting with the High Commissioner for Grenada, Kisha Alexander-Grant, this week it was nowhere to be seen.

A picture from the meeting on Tuesday shows the same small table Harry and Meghan’s photo was once placed on – minus their picture. The other two framed pictures remained in position. It is not the first time a picture has been removed from a prominent place in the audience room.

The photos of Meghan and Harry and the brothers together took the place of a portrait of the Queen’s daughter, Princess Anne, and her husband Timothy Laurence, both in uniform.

There has been some speculation that the picture – that went on display after Meghan and Harry’s wedding in May 2018 – has been taken down to respect the couple’s privacy. Their relationship has been under close scrutiny following the ITV documentary which followed their tour across southern Africa.

During the programme both the Duke and Duchess of Sussex revealed the struggles they have faced being under media scrutiny and as members of the Royal family. Meghan told ITV News At Ten host Tom Bradby: ‘Any woman, especially when they are pregnant, you are really vulnerable and so that was made really challenging. ‘And then when you have a newborn, you know? And especially as a woman it’s really, it’s really a lot.’ When asked if she was ok, Meghan said: ‘Well, I guess, and also thank you for asking, because not many people have asked if I’m okay, but it’s a very real thing to be going through behind the scenes.’

Prince Harry voiced his fears of ‘a repeat of the past’ and said he wanted to protect his family from the media. Harry also opened up about his relationship with his older brother, saying he and William have ‘good days’ and ‘bad days’ but are on ‘different paths’.

Prince William was said to have been left ‘very worried’ about his brother and sister-in-law following the emotional documentary. A Kensington Palace source is said to have told the BBC there is a view that the couple are currently in a ‘fragile place’. A spokesman for Buckingham Palace said it would not be commenting on the pictures.