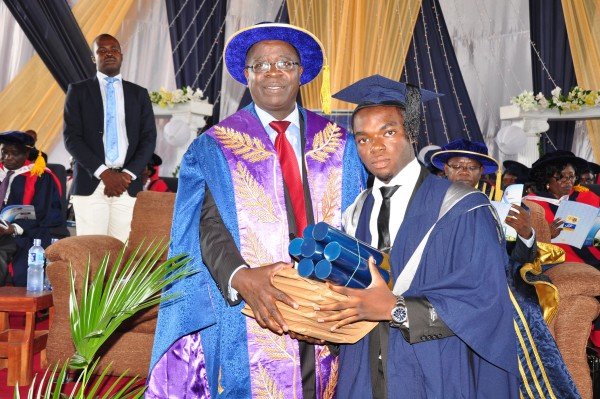 Some take to sports, break every record and set new ones. Others like Nigerian national Onoriode Reginald Aziza take their academic journey seriously earning laurels through every stage.

With over 25 academic awards (including the Faculty of Law Prize for the Best Student in the Faculty of Law OAU, the Mohammed Bello Prize for the Second Best Student at the Nigerian Law School, and the Wolfson College Jennings Prize for a Distinction on the Master of Corporate Law in Cambridge), Aziza proves on the continent and beyond, he truly bears a fertile mind which absorbs knowledge quite phenomenally.

Aziza hails from Nigeria’s Delta State, born to a civil servant and a Professor of Linguistics at Delta State University, a firm foundation to build on. He ensured his parents’ investments in his education did not go waste.

He was called to the Nigerian Bar in 2013, with an eye for corporate law and litigation.

But is Aziza naturally gifted like Abedi Pele – Ghana football legend – or his success has been as a result of practice and repetition till mastery is achieved? He informed baralpha.wordpress.com what drives him.

“…My driving force has been an unrepentant commitment to excellence. It is all I have ever wanted to do and be: excellent. As I have said and will always say, I am no genius and I certainly do not consider myself as naturally gifted or smart. I believe I have only been thirstier than most in pursuing excellence. I believe, as did Aristotle, that excellence is not an act but a habit. The pursuit of this habit of excellence has thus been my driving force.”

Curiously Aziza had wanted to be a neurosurgeon but when his Junior Secondary School Examination results were stellar, his father made the mistake to demand he opted for medicine.

“To be frank, my decision to study law was an act of rebellion against my Dad. My early goal was to be a neurosurgeon. I  flirted with  the  idea for  a number of  years  until  I  was 12, when I  took my JSCE examinations. The  grades  came  out  exceptionally  well, and my Dad told me he wanted me in medicine and went on  to name  the  subjects  I  will  take  in  my  SSCE examinations. The rebel in me sprang up and I resisted (although it was what I wanted). It  appeared  that  the thought of someone naming my subjects for me irked me, because if given the choice myself, I would have picked the exact courses my Dad selected! I still remember the exact words I used in my declaration of rebellion: ‘In fact, I want to study law.’  Grinning  joyously  at  each  of  my graduations  from  the  Obafemi Awolowo  University, the Nigerian  Law  School,  and  Cambridge,  the  look  on my Dad’s face shows he is happy I rebelled,” he revealed.

According to Aziza, the one man he drives inspiration from in Nigeria’s legal profession is Prof. Olukonyinsola Ajayi SAN.

He submits: “In Nigeria, my model  in the profession  is  without  a  doubt  Prof. Olukonyinsola  Ajayi SAN, the Managing Partner of Olaniwun Ajayi LP. Unmatched in wit, unparalleled in logic, peerless in knowledge, quick in thought, clear in argumentation and unrivalled in poise, he earns my ceaseless respect.”

Aziza’s feat is more impressive given he bagged his three first class degrees from Obafemi Awolowo University, Ile-Ife, the Nigerian Law School and finally Cambridge University by the time he turned 23.

Aziza now 25 gained admission into OAU to study Law at the age of 15 and while his eventual feats may look easy, he notes that he battled to maintain his grades in the early days.

Despite being obviously clever, Aziza didn’t gain entry to Cambridge on a silver platter. With his parents retired and short on cash, Aziza needed external funding to advance with his schooling but various letters to people in government to support yielded nothing till he secured a scholarship to attend Cambridge.

While a doctoral student at the University of Oxford, he also serves as an Attorney at Chevron Nigeria Limited; the big oil producers in Nigeria.

His expertise lies in securities law, investment and dispute resolution. In 2017 Aziza spent six months with Shearman and Sterling in Paris and before that a short spell at Olaniwun Ajayi LP in Lagos. He was also briefly an associate with Herbert Smith Freehills in London. This placement in the London office was the culmination of the bursary awarded to him by the law firm to study at Cambridge.

As Aziza puts it, the success and wealth he enjoys today are benefits from his unrepentant commitment to excellence. Perhaps you too can borrow a leaf from his book.