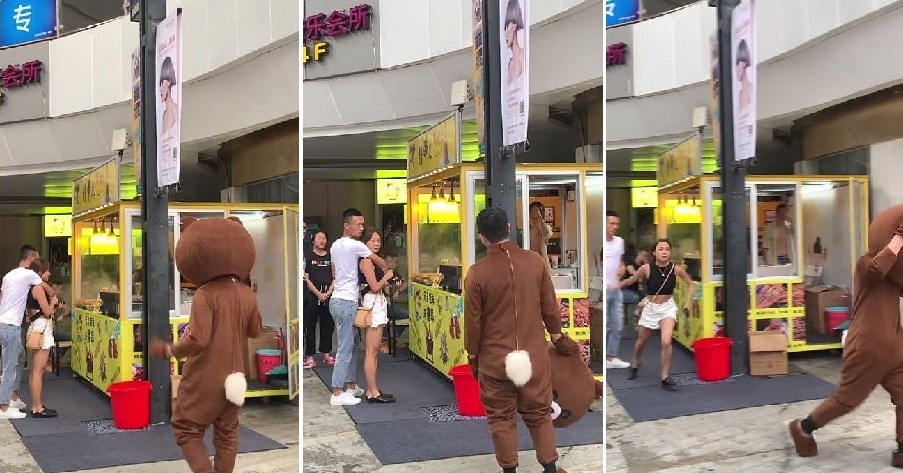 Finding out your other half has been cheating on you isn’t fun at all and this poor man was heartbroken when he saw his girlfriend with another guy. In a Twitter post that has been going viral, the user shares several photos of a guy dressed in a teddy bear mascot and facing another couple.

Based on the caption of the post, the guy wearing the bear costume had been in a long-distance relationship with the girl, and he had decided to surprise her. He had reportedly traveled over 2,400km to give her a surprise, but he was the one that got the nasty shock in the end.

He saw her in the arms of another man and without saying a word, he took off the head of his costume and stared at the cheating couple. She noticed someone staring and turned her head to look, which was when she noticed her boyfriend standing there.

The photos show him walking off without a word as he puts the head of his costume back on. Probably to hide his tears! The girl chases after him, but he flings off her hand and continues walking. Later, she looks like she has caught up with him and is hugging him, but he seems to be unresponsive. It is unclear whether they got back together after that. A picture speaks a thousand words and the poor guy certainly looks sad!

From the photos posted, it looks like this incident happened in China and there were reports that the guy had originally traveled there to give his girlfriend a surprise on her birthday but this has not been confirmed. The photos are believed to have been originally uploaded on Weibo, and netizens who saw it sympathised with the man.

They advised him to dump the girl and move on while criticising the girl, as they did not understand why she would chase after him seeing as she was already in the arms of another guy. Stay faithful! Many of them wrote comforting comments and consoled the guy saying that he would find a better one. There were speculations that it was staged or fake but this has not been confirmed as well.

That is certainly one heartbreaking way to find out that your other half is cheating on you! We hope he finds a better girl next time!