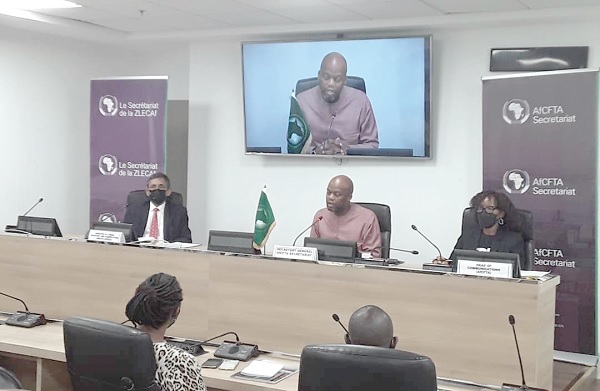 The African Continental Free Trade Area (AfCFTA) agreement has made a major breakthrough, as its Council of Ministers has now agreed on a criteria to determine the origin of 88 per cent of all products on the tariff books across the continent.

Technically known as the Rules of Origin, it is the level of value addition to raw materials and semi-finished products that can be accepted as locally produced.

Pending approval by the Heads of State at the African Union (AU) Assembly, which will take place in Addis Ababa, Ethiopia, soon, the agreement will become the basis to commercially start meaningful trade under the AfCFTA.

Addressing the media after the eighth meeting of the Council of Ministers of AfCFTA in Accra, the Chairman of the council, Mr Ebrahim Partel, said: “This is a major breakthrough for AfCFTA and this allows us to now confidently say that we have a package of products that we can start trading on.”

In July 2019, when a Heads of State meeting concluded key modalities of the treaty for AfCFTA to come into effect, one of the issues it came up with was the establishment of the Council of Ministers responsible for trade matters across the continent.

Mr Partel said the council had since been meeting regularly, leading to the agreement.

“Our eighth meeting was very successful and historic. Over the course of the two-day meeting, we took some ground-breaking decisions which will now be conveyed to the Heads of State at the AU Assembly.

“The most significant of them is that we have bid down key rules of origin that allow us to now state confidently that we have a package of products that we can start trading on,” he said.

“In other words, we have now defined for each of them what constitutes the minimum African content for a product to be traded among countries of the continent on the basis of preferences.

“This is a major breakthrough and I am happy to say that this two-year period of work identified more than 850 additional products for which rules of origin have been agreed,” Mr Partel added.

He also said the council agreed on other matters, including a process to bid down the completion of negotiations on trade and services under the AfCFTA agreement, because “we want to fast-track those negotiations on services to create large African markets in those areas”.

“We cannot continue to produce raw materials for other continents. Our moment of industrialisation is here now and this package will take this initiative forward,” he said.

Mr Partel further said the meeting also adopted reporting modalities on dispute settlement processes, such as “day-to-day challenges that come up in trade relationships among countries and companies”.

The Secretary-General of the AfCFTA Secretariat, Mr Wamkele Mene, said negotiations on the trading of services were at an advanced stage of completion, with 46 member states having submitted their schedules of specific commitments.

He said the council had directed that the negotiations be concluded by June 30, 2022.

He also said the AfreximBank had agreed to support some sectors of the African economy with funding, key among them being the automobile industry.