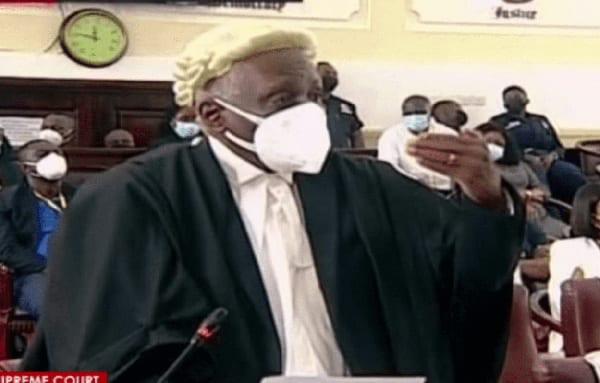 Lawyers for former President John Dramani Mahama, who is challenging the outcome of the 2020 presidential election, will today move a motion before the Supreme Court, seeking permission to reopen his case.

The motion is to facilitate the petitioner’s quest to subpoena the Chairperson of the Electoral Commission (EC), Mrs Jean Adukwei Mensa, to testify in the 2020 presidential election petition before the apex court.

The former President’s legal team, led by Mr Tsatsu Tsikata, will seek to convince the court that reopening the petitioner’s case to pave the way for the EC Chairperson to be subpoenaed would be in the “interest of justice and fairness”.

Mr Mahama filed the application for leave (permission) to reopen his case last Thursday, barely an hour after the court had overruled an objection by Mr Tsikata to the decision by the two respondents (the EC and President Nana Addo Dankwa Akufo-Addo) not to call any witnesses to adduce evidence.

In its ruling, the highest court of the land held that it was not clothed with the power to compel Mrs Mensa to testify because the rules of court and many case laws gave the respondents the right to either call or not call witnesses.

He closed his case on Monday, February 8, this year, after calling three witnesses to testify on his behalf.

Mr Mahama adopted the strategy to have his case reopened to pave the way for his legal team to subpoena the EC Chairperson, since the avenue which would have allowed his lawyers to cross-examine Mrs Mensa is no longer available, following the Supreme Court’s decision to uphold the decision of the respondents not to call any witnesses.

In the application for leave to reopen his case, former President Mahama averred that his lawyers were ready with the subpoena and would readily file it immediately the court granted him the permission to reopen his case.

In a 39-paragraph affidavit to support his motion, the petitioner argued that it was in the interest of justice and fairness for him to be allowed to reopen his case to give his lawyers the opportunity to subpoena the EC Boss.

“As of the time my counsel closed my case, the representation that had been made by each of the respondents to the court, and specifically to me, was that the witnesses who had filed their witness statements were going to testify. It, therefore, came as a surprise that counsel for the respondents announced, on Monday, 8th February, 2021, that that was no longer the case,” he averred.

The former President further contended that it would be in the interest of justice if he was allowed to reopen his case to enable his lawyers to subpoena Mrs Mensa, owing to her unique position.

“The witness (EC Chair) has a unique role under the Constitution in respect of the presidential election that took place in Ghana on December 7, 2020 and having her testify is critical for this court to ensure compliance with the Constitution, more so as the witness to be subpoenaed did make the declaration whose constitutionality and validity I am challenging in this suit,” he argued.

Former President Mahama also said it would be in the interest of justice and fairness if Mrs Mensa testified to some of the assertions made by his witnesses, as the lawyer for the EC sought to challenge them during cross-examination.

“It will be fair to all parties if Mrs Mensa testifies to what transpired between Mr Mettle-Nunoo and her to settle that important issue, which is relevant to matters before this court,” he added.

In his petition, former President Mahama contended that no candidate won the 2020 presidential election and, therefore, the declaration of President Akufo-Addo as the winner of the election by Mrs Mensa was “null, void, unconstitutional and of no legal effect”.

He argued that as per the results announced by Mrs Mensa on December 9, 2020, no candidate garnered more than 50 per cent of the total valid votes cast, as required by Article 63(3) of the 1992 Constitution.

Former President Mahama, therefore, wants the Supreme Court to declare the declaration on December 9, 2020 as null and void and also order the EC to conduct a run-off between him and President Akufo-Addo.

He has also accused the EC of engaging in vote padding by deducting some of his votes and adding it to that of President Akufo-Addo.

In their answers, President Akufo-Addo and the EC argued that the petition was incompetent, lacked merit and raised no reasonable cause of action.

It was their contention that the petition did not even meet the requirement of a presidential election petition, as stipulated in Article 64 (1) of the 1992 Constitution, and was, therefore, incompetent.

That, they argued, was because the petition made no allegation of infractions in the election at any of the 38,622 polling stations and 311 special voting centres.