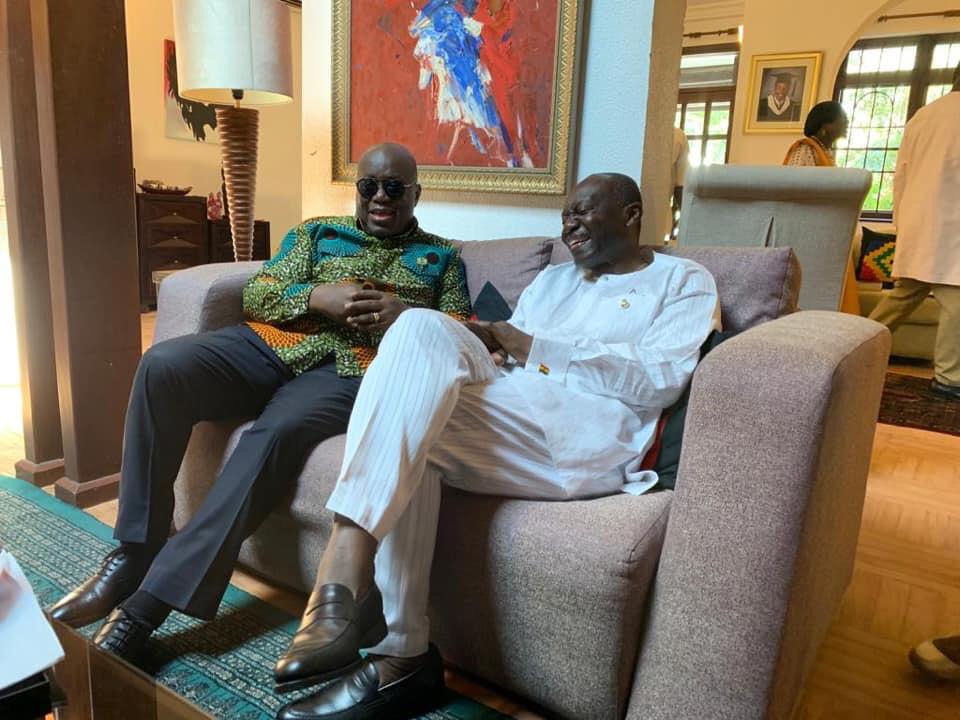 It has emerged that Ghana’s Finance Minister, Ken Ofori Atta actually donates his monthly salary to charity since he took office in 2017.

Ruling New Patriotic Party (NPP) strongman, Gabby Asare Otchere-Darko who made the revelation in a beautifully carved message eulogizing the Finance Minister who is celebrating his 60th Birthday today, said the Minister does not also use a police escort or Bodyguard.

”Little wonder that he donates his salary every month to charity. He refuses to live in a Govt bungalow, drives a Ghana-made car, lives a simple but Godly life and does not even have a police guard in his front seat as he is entitled to have” he said in the statement.

Read the full text of the statement below:

He has a lot to celebrate for his God has been good to him. He was almost aborted by his worried mother, who was not the wedded wife. Brought up in Kyebi, he worked hard to receive the best education available and has since worked even harder to build a beautiful home with a lovely wife and three responsible kids (plus adopted one), all doing well. He built a multi-million dollar international financial business, retired, and went into what his dad, a former finance minister himself taught his son: public service, sacrificing your talent, fortune, experience, energy and resources for the greater public good.

Since 2006, Ken put his resources behind Nana Akufo-Addo and took up the ultimate responsibility of raising the resources needed to pursue three grueling presidential campaigns.

In 2017, he was appointed finance minister – a reward for his handwork and an opportunity to use his know-how to help fix an economy in a mess and in the grips of the IMF. He surrounded himself with a strong, tight team of achievers, changed, for purpose, the mindset of the senior civil servants he has to depend on to deliver and set to work.

In the mode of the President who appointed him, Ken’s objective was never and could never be to use the position of public service to enrich himself. No! Rather to use the office to help his party create what Ghanaians deserve: a free and progressive society of  opportunities and prosperity for all, regardless of the circumstances of your birth.

Little wonder that he donates his salary every month to charity. He refuses to live in a Govt bungalow, drives a Ghana-made car, lives a simple but Godly life and does not even have a police guard in his front seat as he is entitled to have.

As hard as his opponents try, not a single mud of corruption can be falsified and forced to stick on him. He practices what he believes in: integrity, discipline, compassion and the fear of God.

On the economy, even his opponents will admit that Ken, with the ever available support of the Bawumia-led Economic Management Team, has changed how the economy was ran. He has brought credibility into Ghana’s economic management. Just a few (10) examples of what has been achieved on the economy since Akufo-Addo, Bawumia and the team took over in January 2017:

1) IMF projects Ghana’s growth rate (after the downward revision of global economic growth rates) to be at 7.6% for 2019. This puts Ghana, like 2018, among the world’s highest, compared to a growth rate of 3.6% in 2016, under President John Mahama, which was the lowest in over two decades.

2) Since 2017, for the first time in over a decade, Ghana has recorded and maintained a surplus trade balance account. Exports are doing well, with Jon-traditional goods on the rise, and the industrialization project deliberately on course.

3) NDC ran to the IMF in 2014/15 for an embarrassing bail out  of oil-rich Ghana (we became oil rich in 2011). In 2016, the Govt could not meet the agreed performance indicators with the IMF and things look ever gloomier. But by April 2019, NPP had managed a successful exit from IMF’s bail out programme.

4) Ken had the courage and compassion to find billions that were not budgeted for to protect depositors funds as seven banks collapsed. By Mid-2019, the banking sector was recording an after tax profit of 1.67 bn cedis, representing a year-on-year growth of over 36%!

5) Former President John Mahama said this week that corruption frightens investors. Yep! He knew exactly what he was talking about. By December 2017, FDI had doubled under NPP. Ghana has since then remained the top destination in West Africa for foreign direct investments.

6) The rate at which prices of goods and services has been moving has been the slowest under NPP in the entire history of the Fourth Republic. Inflation is now at 7.6%; from 15.4% in January 2017. This represents the lowest inflation rate since 1992! This means that Ghanaians are better off under this Govt in having the value of the money in their pockets protected. The greatest stimulant for poverty is inflation and another consequence of inflation is mass unemployment.

7) Policies of this Govt has meant that households in Ghana have been made to keep more cash in their pockets to spend as they please.  Over GHS4.3 billion have been handed to households from just three sources. This has happened through these social welfare interventions: LEAP, School Feeding for all students in public schools and Free SHS. GHS4.3bn.

8)The previous Govt gave out contracts without knowing how to pay for them and left the Treasury owing billions in arrears to NHIA, BDCs, GETFund, Road Contractors etc. Arrears hurt banks, kills businesses and jobs. NPP set out systematically to clear all these arrears and is doing so remarkably. GHS4bn has been spent to settle arrears owed to road contractors alone. For the first time ever in our history, every road contractor is being paid within one month. And, 82% of all those owed are being paid in full – 100% arrears cleared! This means good Christmas for many families and our roads are being fixed and with a plan to pay.

9) Since 2017, borrowing is getting cheaper and cheaper. This is good for business and workers alike. Ratings agencies (S&P and Fitch) have both upgraded our credit ratings under President Akufo-Addo, to B with a stable outlook, from B- with a negative outlook under President John Mahama, with our external reserves increasing from 2.5 import cover under NDC to 4.3 months import cover now. It was not for nothing that a country that under John Mahama needed a World Bank support in order to issue sovereign bonds, is now seeing record eurobond offering – multiple firsts! longest tenor, most over-subscribed, and largest amount raised ever and at lower interest rates.

10) Ken Ofori-Atta and his team are showing how a Govt can run an economy well and still fulfill its costly but necessary flagship Programmes. Fiscal discipline, competence, integrity, creativity, and focus are the hallmark of this Govt. Unlike what we saw before, Ken has consistently met his deficit target (2017 and 2018) and on track to meet it again in 2019. Fiscal deficit is at 4.5%, from 9.3% in January 2017. This discipline and the reining in of reckless spending, unlike his predecessors, is what has led to the currency stability and the massive drop in inflation and interest rates over the last three years. The Economy is on track. But Ken will be among the very first to admit that there is still a lot more work to be done because so many of our people continue to struggle to make ends meet.

Happy Birthday! Look after yourself and our economy in equal measure!