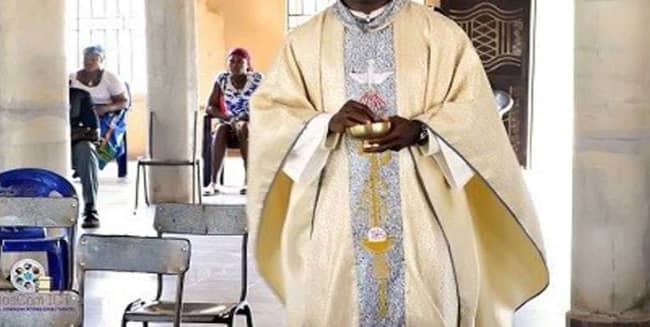 Miss Queen Princess has died after confessing she framed a catholic priest up over her pregnancy.

Princess died while giving birth in the hospital after confessing she lied against the priest, pointing out he was not responsible for her pregnancy and never slept with her.

Princesses, who seek for forgiveness before her death, said she brought humiliation and disgrace to the priest for issues he has no hands in.

Narrating how she became pregnant for another man, Princess said she is really sorry for the pain she brought to the priest.

The priest who was a parishioner in one of the Catholic parishes in north-central Nigeria, WAR learned was humiliated by the members of the church, removed from the parish and redeployed to Bishop House as a punishment for impregnating a lady at the parish.

Mr. Joshua Fidelis, a family relative to Princess, told WAR, everybody in the parish believed her while the priest was never given the opportunity to say his own side of the story.

Fidelis narrated how the parishioners pulled the priest down from the altar during Sunday service and forced him out of the church and called him all kinds of names.

He, however, added that the community wrote a petition to Bishop accusing the priest of impregnating the lady, with her uncle supporting the entire move to ensure the priest was removed.

When the priest was leaving the parish, because he was removed for allegedly impregnating Princess, he assured her and the Catholic community, God will surely vindicate him, Fidels said.

Six months after, Princess, while putting to bed in one of the private hospitals in Jos, the Plateau state capital, confessed she framed the priest up, ask that he should forgive her, and died few seconds after her confession.

WAR learned Princess died together with her baby.

Fidelis, however, said the family is making an inquiry to know where the priest is currently serving to meet him and tender an unreserved apology and ask for forgiveness, pointing out that they have sinned against God and the Church.