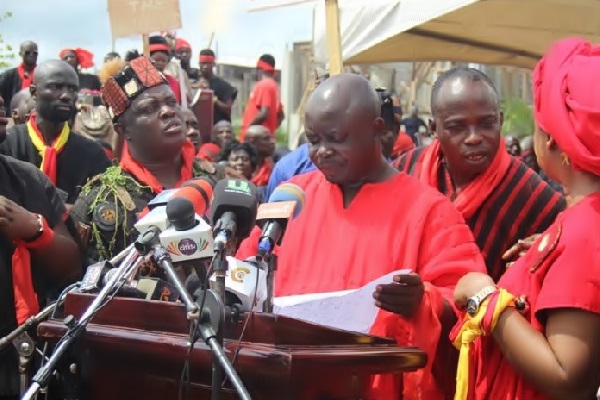 The National Democratic Congress and their flagbearer, John Dramani Mahama, are in hot waters as the good people of Kyebi in the Akyem Abuakwa Traditional Area of the Eastern Region have lividly demanded an unqualified apology from the leadership of the opposition party for inflammatory and insulting comments from a key member of the party.

Seething with rage as they poured out onto the streets of Kyebi, the protestors, on Monday, September 23, asked the NDC to apologize to the Okyehene, Osagyefo Amoatia Ofori Panin over some insulting comments made against him and his people by Kwame Zu, the Ashanti Regional Secretary of the NDC.

The regional Secretary, at a demonstration held by the party in Kumasi, in the course of last week, said that but for the benevolence of former President John Mahama, Okyehene and his subjects were in constant competitions with animals for water to drink.

According to him, if Mahama had not given them water, the people within the Kyebi enclave would still be drinking dirty water with cattle, goats and sheep. These comments have nettled the Akyem Abuakwa Traditional area, leading to them asking for an unequivocal apology to be rendered to the Okyehene and his people by the leadership of the NDC. This has not been complied with, leading to the protests on the streets of Kyebi.

Protestors had placards with several inscriptions indicating their anger over the said comments by Kwame Zu. Some of them read;

‘’We won’t tolerate this NDC rubbish, Shameless NDC, Okyenhene is a unifier, NDC nad Zu, Okyeman has (have) rejected you, Kyebi you are blessed, NDC, you can’t divide Ghana, Okyeman rivers supply over 5 million citizens of Accra, NDC, you won’t get away this time’, etc, etc’’

The Traditional Council of Okyeman has made these demands and they are to be complied with within the next three days or the NDC would face another bout of their anger;

A direct, clear and unambiguous public apology by the leadership of the NDC.

A ritual pacification of the Okyehene by the NDC.

An apology from Kwame Zu.

Should the NDC fail to abide by these demands within the stipulated three days, not only would the door be closed to them forever but the party would not be allowed to have any programme in the zone. The NDC will be declared persona non grata and that all palaces in Okyeman will be closed to the party if they fail to comply with these directives.