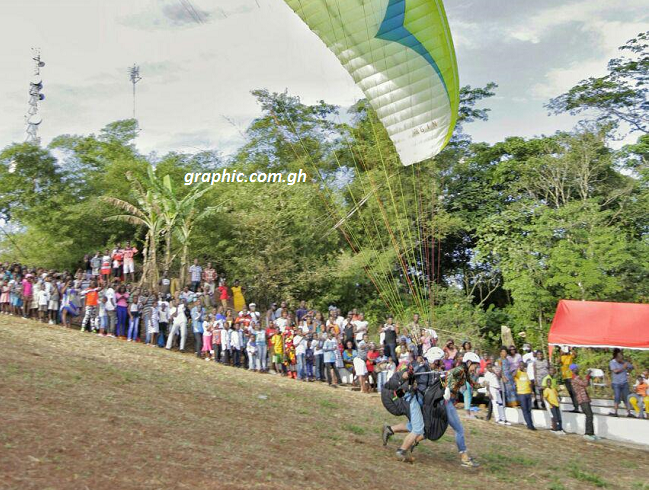 For two consecutive years, the much-celebrated Kwahu Easter Festival will not come off due to the raging coronavirus (COVID – 19) pandemic which has affected mass gatherings and interaction.

But for the pandemic, businesses in Ghana would have started preparing feverishly to storm the Kwahu Ridge to market their products to the numerous revellers who travel from far and near to participate in the annual rendezvous with the paragliding festival being the flagship event.

Media houses, particularly radio stations, would have started their cacophonic advertisements to create awareness of the festival.

The announcement to again suspend this year’s Easter activities was made by the Kwahu Traditional Council during a meeting at the Abene Palace on Thursday, March 11, 2021.

The chiefs, led by the Kwahuhene, Daasebre Akuamoah Agyapong II, who is the President of the Kwahu Traditional Council, and the Ghana Tourism Authority (GTA), have cautioned citizens to strictly adhere to this directive.

The Council said whoever failed to comply with it would be severely dealt with.

“We cannot prevent anyone from coming to Kwahu during the Easter holidays but activities will not be allowed.

“Although Easter usually starts on Thursday, we are placing a ban on every activity from Wednesday to Wednesday,” the chiefs said.

The Paragliding festival became an integral part of the Kwahu festival in 2005 with seasoned pilots invited by the Ministry of Tourism to fly hundreds of people during the three-day event on the Odweanoma Mountain at Kwahu Atibie.
However, COVID -19 has scattered these memorable occasions.

The pandemic has also affected domestic tourism heavily as most hotels relied on patrons to break even financially. A research, conducted by the Ghana Tourism Authority in 2019, indicated that the average daily income expenditure during the festive period was above GH¢50.00 per person. It also indicated that 28 per cent stayed in hotels, 11 per cent in guest houses, three per cent in tents and 43 per cent in private homes.

Local pubs, which made windfalls as a result of the pandemic, have equally been affected. Madam Sarponmaa Aboagye, an operator of a drinking spot, lamented how the pandemic had affected her business.

“I would have increased my stock by now in anticipation of the festival, but now everything has come to a standstill,” she said.

Nana Kofi Boateng shared the same view and said he was looking for an additional source of income to survive with his wife and four children as his business had almost collapsed.

He prayed that a solution would be found so that “we could bounce back to make ends meet.”

The municipal and district assemblies in the area have also been affected as they equally benefit from the largesse of the festival. A source at one of the assemblies told the Daily Graphic that revenue, during that period, went high through tolls collection.

Not left out are taxi drivers who ply between Nkawkaw and the Kwahu Ridge. Most of them complained that since last year, patronage had dropped, with the suspension of the festive activities with some of them indicating that “our cocoa season is at a standstill.”

In the Kwahu Traditional Area, every Easter is regarded as a homecoming event. The period is used for all kinds of activities including settling family feuds, marriages, inauguration of projects, including private houses, remembering the dead and pacifying the gods, holding of crusades by churches, traditional council meetings and the promotion of community cohesion.

Programmes have been put on hold in order not to spread the pandemic, while others have been cancelled completely.

For instance, since last year, a programme by citizens of Kwahu in Tema in the Greater Accra Region to honour hardworking teachers has been hanging in the balance as no one knows when it will be organised.

While admitting that the pandemic had no doubt affected their businesses and social activities during this time of the year, most businesses and residents of the Kwahu area are optimistic that the situation will improve, particularly with the administering of the approved vaccines, to enable things to return to normal next yea

Last year preparations were far advanced for the festival, but it was called off after President Nana Addo Dankwa Akufo-Addo announced a ban on all social and public gatherings as part of measures to curb the spread of COVID-19.

In the President’s address on Sunday, March 15, 2020, he declared that public gatherings, including conferences, workshops, funerals, festivals, political rallies, sporting events and religious activities, such as services in churches and mosques, had been suspended for the next four weeks.

Despite the efforts that had gone into the preparation for the Kwahu Easter festivities, the ban was supported by the Kwahu Traditional Council, advising citizens and non-citizens of the area to stay away as the festival had been called off.