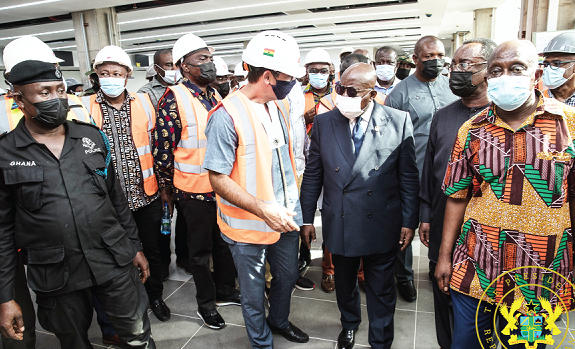 The Kumasi Airport is expected to be ready as an international facility is in October next year when ongoing expansion works are completed.

Currently, the phases two and three of the works — which include a newly-built terminal and a control tower — is 77 per cent complete, according to the Chief Executive Officer (CEO) of Contracta UK, Fabio Camara, whose construction firm is undertaking the expansion project.

A test run of the facility is expected to commence in January next year towards making it ready by June.

President Nana Addo Dankwa Akufo-Addo expressed satisfaction with the extent and quality of work so far when he arrived at the airport last Friday for a four-day tour of the Ashanti Region.

Phase one of the project involved $29 million rehabilitation works in December 2014, which tackled the installation of aeronautical ground lighting systems and rehabilitation of the existing runway.

Ground-breaking for the €66.35m ($75.23m) second phase of the expansion project was held in November 2018, which involve the construction of a new passenger terminal and multiple service facilities at the airport.

The new terminal will have the capacity to handle more than one million passengers a year, while the existing runway is to be extended from the current 1,981 metres to 2,300 metres, enabling the airport to accommodate wide-body aircrafts such as Boeing 737-800.

Under phase three, the scope of works are the development of a terminal building extension, a new fire station, new fire access road and new air control tower.

The construction of the Kumasi Airport was approved in 1940 and operations were started in 1943.

Airside operations at the airport were streamlined by the government with a series of development activities carried out on the runway between 1958 and 1959.

The airport underwent main renovations such as installation of lights on the taxiway and extension of the runway southwards during the 1970s.

Further lighting system installation, runway extension, and construction of a new terminal building were completed by 1993 under a modernisation project.

The airport served as a military base until it was converted into a domestic airport in 1999.