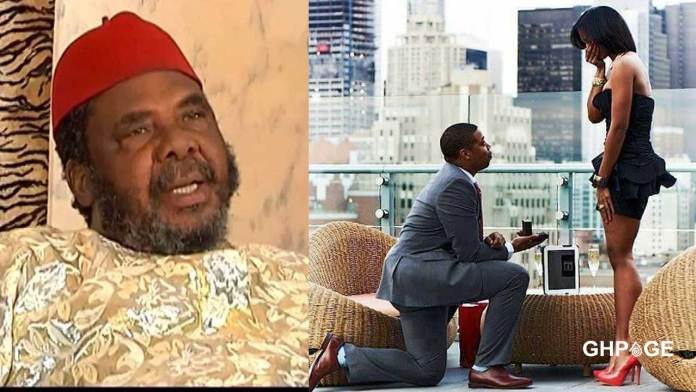 Veteran Nollywood actor Pete Edochie has stated that it is inappropriate for men to go on their knees in a bid to propose marriage to their girlfriends.

It is a common practice in Europe and other foreign countries where men go on their knees to propose to the girlfriends at open places such as the mall and any other place that has a lot of people gathered.

The act is gradually being copied by Africans and this has made the veteran actor angry and has commented on the act which everyone is now copying.

According to the award-winning actor, the act is not part of the African doctrine and hence should be thrown away and not given space in the African culture.

“Kneeling to propose to a woman is white people’s culture because women dominate there and have more right than men, it is not the African man’s ways,” he said.

To buttress his point, he used our traditional setting as an example and stated that it is a woman who kneels to give drink to a man to show her loyalty, humility and total submission to the man and that’s the way it should be.

“I didn’t kneel to propose to my wife and we’ve stayed 50years in our marriage, I took my time to woo her, when it’s time to settle down, I asked if she’ll marry me and that was it”, he said.

Pete Edochie also narrated how the Whites came to Africa pretending to be archaeologists but rather took took to destroying our culture while trading us.