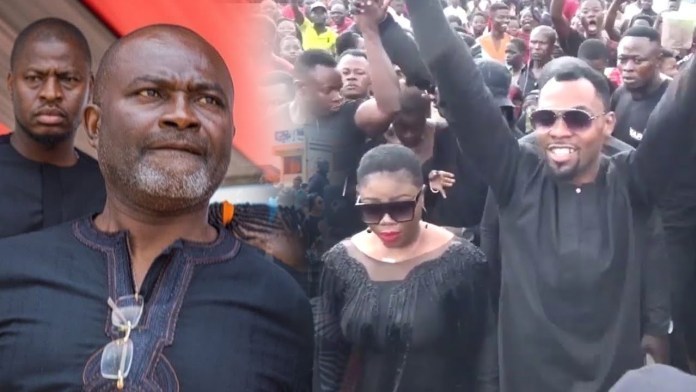 Assin Central lawmaker, Kennedy Ohene Agyapong was left angry at a funeral at Tepa in the Ahafo Ano North District of the Ashanti Region over the weekend after the leader of Anointed Palace Chapel, Rev. Obofour and his wife Ciara became the centre of attraction when they arrived at the funeral grounds.

The funeral was for the late father of the Paramount Chief of Tepa, Nana Adusei Atwenewa Ampem I.

BestNewsGH.com sources at the funeral said the arrival of the popular Man of God brought the occasion which was being held at the Tepa Town Hall to a virtual standstill.

Scores of mourners approached him and his entourage and some in a bid to catch a glimpse of him breached security protocols, which his security and body guards had a hectic time dealing with.

They chanted the name of his church ‘APC’ as he approached with smiles while waving back, a video which captured the incident showed.

Rev. Obofuor’s presence at the funeral was loud as his long convoy of exotic and luxurious cars including Mercedez Benz Salon cars, Lexus, Maybach, and Toyota Landcruisers among others with his customized number plate ‘Obofour’ could not escape the prying eyes of mourners and all who were present.

Mr. Agyapong was said to have gotten angry and condemned the show of money by the Man of God and his wife.

Mr. Agyapong has been at the forefront of castigating and berating pastors who operate what he calls ‘One man churches’, saying they are criminals who hide under the name of the gospel to dupe their already poor followers to enrich themselves.