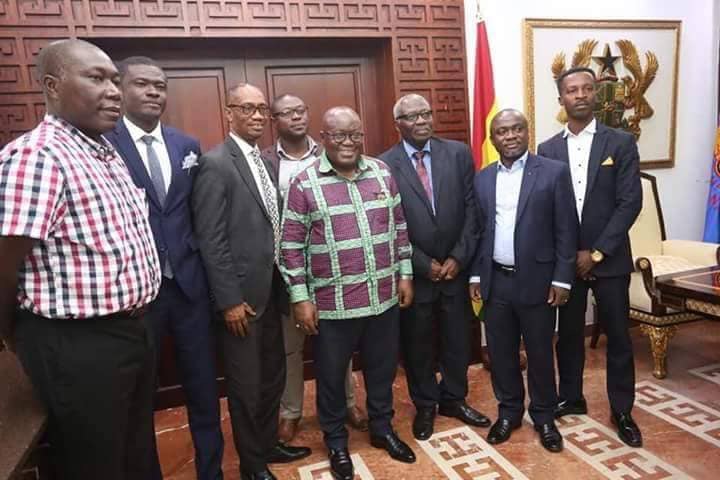 President Nana Addo Dankwa Akufo-Addo has assured students and alumni of the University and Unity Halls of the Kwame Nkrumah University of Science and Technology (KNUST) that he will consult with the University’s Council to find an amicable solution to recent events affecting the two halls.

Addressing a seven-member joint delegation of the University Hall (Katanga) and Unity Hall (CONTI) at the Jubilee House when they paid a courtesy call on him to present their petition, President Akufo Addo said he will, through the Minister for Education, initiate the process to engage the highest decision making body of the university to deal decisively with the impasse between the parties.

Authorities of the Kwame Nkrumah University of Science and Technology at the beginning of the 2018/2019 academic year decided to convert the hitherto male-only halls into mixed halls, much to the displeasure of the alumni and current students of the two halls. All efforts on the part of the alumni to get the University authorities to reverse their decision have yielded no results.

Alumni of the University Hall, (Katanga), on Friday the 10th of August, 2018, staged a protest march over attempts by the University’s authorities to convert the all-male hall to a mixed one. The demonstration started from the Kwame Nkrumah circle and ended at the Education Ministry where they presented a petition to the Ministry of Education.

On the 24th of August, 2018, the Kumasi High Court threw out an injunction application seeking to prevent authorities of Kwame Nkrumah University of Science and Technology (KNUST) from converting University Hall and Unity Hall to unisex halls. The Court explained that residence has already been granted to female students and seeking to prevent same would interrupt the activities of the school.

The petition had three main requests. The first is for the President to instruct the Ministers of Education and the Interior to put measures in place to ensure that students can pursue their academic goals without any fear of intimidation, harassment and physical abuse from University authorities as well as from state and campus security personnel. The second is a prayer for the Minister for Education to be instructed to present to the President and Cabinet, a comprehensive proposal addressing the acute residential and academic facilities shortage on campus and lastly, an order for the reversal of the recent actions by the University to convert University Hall, Unity Hall and Africa Hall to mixed-gender halls in preference for a more meaningful and sustainable solution of safe and secured residential accommodation for all students on campus.

Leader of the Delegation