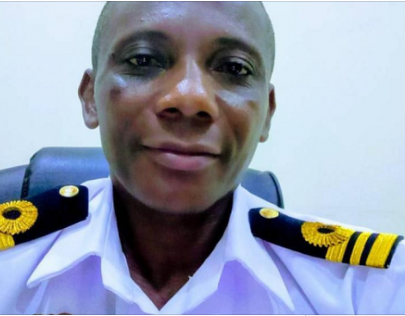 Solomon Derikoma, a lieutenant commander of the Nigeria navy, was found dead inside his apartment on Sunday.

The deceased was undergoing training at the Armed Forces Command and Staff College, Jaji, Kaduna state.

A source told TheCable that his corpse was found inside his room on Sunday morning.

The source said Derikoma and his colleagues were to go on a study tour on the day and after waiting for him, some officers decided to visit his apartment.

“Derikoma and some of his colleagues were to to travel for a study tour,” the source who craved anonymity said.

“After waiting endlessly for him, some officers headed to his apartment, where a padlock was found on the door.

“This gave the impression that there was no one in the room.”

The source said after the padlock was broken, the officers found the deceased with a stone by his side.

He was reportedly in a pool of blood.

“He was possibly murdered  and his body had started decomposing, which means it happened anytime from Friday,” he added.

Derikoma’s colleagues were said to have proceeded with the tour.

The deceased with service number: NN/2852 hailed from Rivers state.