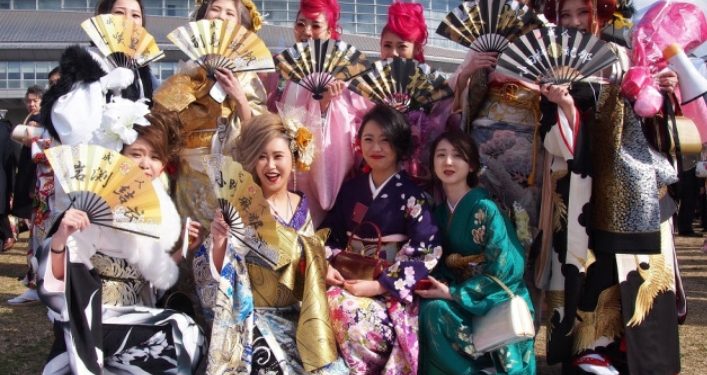 It was the second Monday in January 2020, and I was told by my Principal, it is a holiday, so Afiba-sensei (meaning Teacher Afiba in Japanese) please stay home. I gladly agree because my children and I can legally extend our weekend by 1 day.

Interestingly, that is the reason Japan in the year 2000 changed this significant day in their calendar from a fixed 15th January to a malleable second Monday in January every year.

Japan has significant stories behind all their holidays, as interesting as the reasons behind the GOLDEN WEEK HOLIDAY in May was, so was the story behind this restful day. The GOLDEN WEEK were holidays that marked the transition from the Heisei era (the reign of Emperor Akihito who abdicated the chrysanthemum throne in April after reigning for 31 years) to the Reiwa era ( the reign of the current Emperor Naruhito, who took over from his father)

I sought to find out what was the feather in this holiday for me so I take lessons while I enjoy the day with my family. I had very intriguing revelations about the day, the Japanese called “Seijin Shiki”, translated as “Coming of Age” what we will otherwise call in Ghana Dipo, Bragoro or Fuamunli among some ethnic groups. What I heard and saw about the day was so much to be written in one article, yet let me try my literary summary skills and caption today’s write up, “The Japanese version of Dipo Bragoro or Fuamunli…the age when you can safely call the pub a ‘friend’ ” 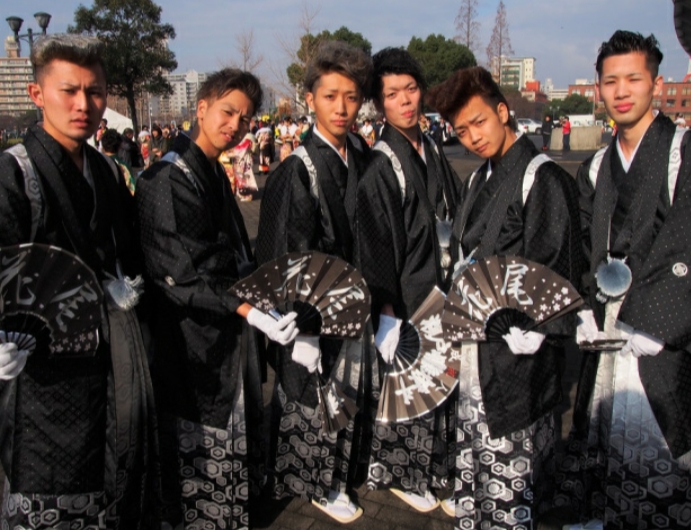 In the age I was born, (That is not to say I am closer in age to Methuselah, only that, currently in Ghana, the practice is dead) when Ghanaian girls experienced menarche, Dipo by the Krobo, Bragoro by the Akans and Fuamunli by the Nzemas specifically {though the Nzemas are also a part of the Akan tribe} (these are some ethnic groups in Ghana) was performed to usher them into adulthood. Various “rituals” marked the ceremony including bead wearing, generous smearing of pomade till the skin reflects like a mirror, sitting on a “sacred stool” and swallowing a whole egg (this egg symbolised the new woman’s womb so it ought not to be bitten or chewed) etc.

The ceremony ended with the new adult given a bath and adorned in elegant clothes with which she parades the community announcing her new status.

The Japanese have these same ‘rituals’ to mark the new status. However, unlike Ghana’s Akan, that typically pegged it after menarche for girls and deepening of voice for boys sometimes, Japan’s is at a fixed age of at 18 years and 20 regardless of whether the body has changed or not. Well, let me tell you the difference between the privileges of 18 years and Japan’s legal age of 20 years, though both ages usher the child into adulthood.

18-year-olds in Japan can acquire passports without their parents’ consent, drive a car, take loans, vote and even get married. Interestingly, however, they cannot smoke, drink alcohol or gamble. Oh yes! You heard me right. So in Japan, I call the age 20, the age when the pub or bottle “safely” calls you a colleague.

If you were thinking aloud and asked me, “how will the bar attendant know whether you are 18 or 20 should you sneak to buy alcohol”? The answer is, “your age ID card”. In Japan, these activities for adults strictly require your ID card, so you cannot sneak. If you are guessing what happened to bribes and forgery of ages on ID cards, may I tell you once and for all that in this land of the “Nihongs”… crime literally does not exist and you very much know that bribery and falsification of documents is a crime.

Well, should you not believe it, I bear you no grudge because as a Ghanaian villager I didn’t believe it too. I thought it was a tale to be told the marines until I lost my phone one saturday afternoon on my way home after an eat out. I guess it slipped out of my pocket because I probably rode too quickly. I rested for 10 minutes on reaching home, realising I had misplaced my phone, I set off to test this “tale” by going to look for it. I rode for about 45 minutes to the first shop I visited that afternoon before checking in at the restaurant, lo and behold! My phone was at the same spot on the walkway…. people were still moving up and down when I stooped to pick it. (Shhh! On your curiosity, I have an article on the mystery of living in Japan, a land without crime and guns coming up soon).

So on the day of the Seijin Shiki, the young women who just came of age, dress in furisode ( a long sleeved type of Japanese kimono that young and single women wear). Usually it is rented from a Kimono shop since buying this elaborate outfit costs several thousands of yen. The young men on the other hand, wear either a kimono for men or a western style attire like suit.

Whereas the Dipo of Ghana is usually the business of a family or a clan, the Japanese Seijin Shiki is a government responsibility and a national ceremony. For individuals in the cities who may not be able to travel to the National capital, a ceremony is held at the city’s local office for them. The city mayor delivers a speech to congratulate the young people in attendance who are eagerly waiting for the official proclamation of the start of their journey into adulthood.

The proclamation is followed by traditional dance and musical shows such as live “taiko” drum performance. The mayor further reminds of the responsibilities that comes with being an adult and how to go about fulfilling them.

Did you know that in the 19 century during the “Edo” period in Japan, the Seijin Shiki or ‘coming of age’ rites was inclusive of rituals as “ohaguro” meaning blackening of teeth. This was done by the married women to these young female adults to symbolise their personal freedom while the young male adults also carried swords openly to symbolise maturity.

Over the centuries, the sword carrying and the teeth blackening have fallen out of fashion.

Of course it is expected to fall in this era even if it had withstood then. I asked rhetorically, how can women spend much time and efforts to whiten their teeth over a period and then blacken it in a day in the name of a ritual?

Notwithstanding, the essentials of the ‘coming of age’ ceremony as the advise given, responsibilities to be undertaken and the lectures about the risks associated with the privilege of being an adult is still bound as the occasion is celebrated.

With what I saw on the ‘Seijin Shiki’ day in Japan, I do not assume to be an embodiment of wisdom, neither am I anywhere close to the decision making powers in Ghana or the authority that be for my opinion to be upheld; Yet I think Ghana’s Dipo, Bragoro or Fuamunli will survive if resurrected should all the archaic “rituals” and the spiritual abracadabra in their performance be carefully eliminated like the Japanese ohaguro (teeth blackening).

However if we maintained the lessons, together with the “unseen barriers” one has faced with before the age as: no alcohol, no gambling, no smoking, no immoral lifestyle etc, I think the HIV/AIDS prevalence rate among the youth in Ghana will be reduced as chastity levels are increased.

In addition to making puberty rite or coming of age ceremony stand strong in Ghana and serve the significant purpose it used to, I ask, can it be part of the government’s Ministry of Gender’s yearly program? In that case, the sector Minister with the power of the president confers on the new adults, their status officially, while announcing work opportunities and government support systems in place to help enhance their chosen careers.

I guess if puberty rite is made this exciting, inviting and a national responsibility as it is in Japan, with opportunities bound, many teenage boys and girls will ‘keep themselves under control’ waiting the official declaration of their adult journey.

I must say that I enjoyed this holiday in Japan. Seeing these young girls reach this stage in their lives, gave me goosebumps as it reminded me of my “Fuamunli” stage in my little village of Nzema Aiyinase a decade ago in Ghana.

(I am the GHANAIAN villager that came to Japan, officially known as Afiba Anyanzua Boavo Twum)

#the age when the bottle and the pub call you a colleague.
#fears, rights, privileges and roles of an adult.
#Seijin Shiki in Japan
#carefully bring back Dipo, Bragoro and Fuamunli without the archaic rituals and spiritual abracadabra