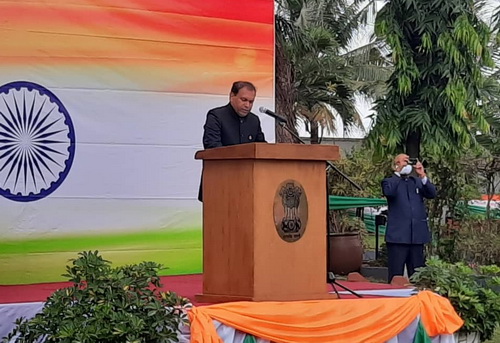 The Indian Government will make available to Ghana and the rest of the world, three vaccines for the new coronavirus disease (COVID-19) that are currently under trial.

The Indian High Commissioner to Ghana, Mr Sugandh Rajaram who made this known to the Daily Graphic in an interview on Saturday said India’s relationship with Ghana which spans several decades, would be further strengthened when the vaccine is ready.

“India is the pharmaceutical centre of the world and as at now our scientists are in the process of producing not just one or two vaccines but three which when are ready will be available to not only Indians but millions of people including Ghanaians”, he said.

Mr. Rajaram was speaking to the Daily Graphic after he hosted a virtual anniversary of India’s independence from the British at his residence in Accra.

The ceremony which was organised under strict COVID-19 protocols, was attended by members of the India community in Ghana and staff of the Indian High Commission.

There were musical and poetry performances by school children.

Almost ready
Mr Rajaram said the ‘groundbreaking’ vaccines on clinical trial were almost ready and could be available in a few weeks.

He explained that India would be able to get the vaccines ready within a short period because the country had the experience of discovering and producing drugs including vaccines.

“Already we produce about 70 percent of all the vaccines in the world which makes India the global pharmaceutical centre so I am sure our scientists will be ready with the vaccines within some few weeks,” he said.

World peace
Earlier in an address to celebrants, Mr Rajaram said the activities of his compatriots must promote tolerance and peace.

He said as a peaceful and prosperous nation, the celebration of independence day must remind all Indian citizens of the vision of the founders of the nation which was hinged on peaceful coexistence among themselves and their neighbours.

Mr Rajaram said if the world worked together, there was the possibility for everyone to live in peace.

Pakistan conflict
Touching on the long standing boarder dispute between India and Pakistan, Mr Rajaram said India was committed to a non-violent approach to resolving to dispute.

However, he said, Pakistan would have to discontinue its violence and engage in negotiations to help bring lasting peace between the two countries.

“Negotiations is what is needed and India has been emphasising this approach because there is no other way than peace to resolve the issue”, Mr Rajaram added.

Mahama has lost touch with his own track record – Sammy Awuku

According to him, Mr Mahama, who is the Flag-bearer of the opposition National Democratic Congress (NDC) was defeated in the 2016 presidential polls because of his poor performance when he had the chance to lead the nation and wondered what Mr Mahama is going to campaign on in this year’s election.

For him, Mr Mahama was defeated in 2016 because lost touch with his own people.

“For John Mahama to come to say that he wants to be re-elected to continue what he was voted out for, means he has lost touch with his own track record.”

Mr Awuku who was addressing a press conference organised by the NPP on Thursday, August 13, 2020 in Accra, said Mr Mahama is noted for “sweet talks with his silver tongue” and that if voters are not careful, they will be deceived to vote for him.

He said Mr Mahama cannot be trusted, and therefore voters should reject his desire to lead the nation again in the upcoming December presidential polls.

According to him, Mr Mahama is contesting this year’s presidential polls to satisfy his own personal gains and that he had nothing better to offer Ghanaians.

Mr Awuku said Mr Mahama’s term in office did not bring any improvement in the lives of Ghanaians, saying “What good work were you doing that you want Ghanaians to vote for you again?”

He said Mr Mahama on many occasions spoke against the implementation of the free Senior High School policy and the payment of teacher training allowances but now says he will continue such policies should he be given the opportunity to lead Ghana again.

According to Mr Awuku, Mr Mahama’s changing positions on certain key policy statements is an act of indecisiveness and incompetence.

He has therefore urged the electorates to vote massively for the New Patriotic Party’s flag-bearer, Nana Akufo-Addo in the December 7 presidential election in order to enable him bring better policies to Ghanaians than voting for Mr Mahama again.