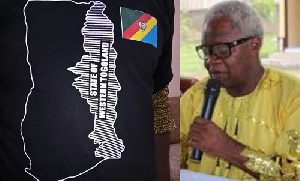 The separatist group that declared independence for Western Togoland is heading for the United Nations to demand recognition.

Over the weekend the Homeland Study Group Foundation declared independence for the Volta, and parts of the Northern, North Eastern and Upper East Regions after its meeting held in Ho.

HSGF had over the years been demanding the secession of the above-mentioned areas from Ghana to become the Western Togoland state.

In May 2019, some members of the group were arrested by the police and charged with conspiracy to commit treason felony, abetment of unlawful training, unlawful assembly and offensive conduct conducive to the breach of peace.

Speaking to Starr News Spokesperson for HSGF George Nyakpo said the Western Togoland has never been part of Ghana and has not been a British colony hence there was no basis to add it to its colony Gold Coast.

He added that the ‘Western Togoland State’ will notify the United Nations of their independence and seek recognition and will require a lot of support from the world body to succeed.