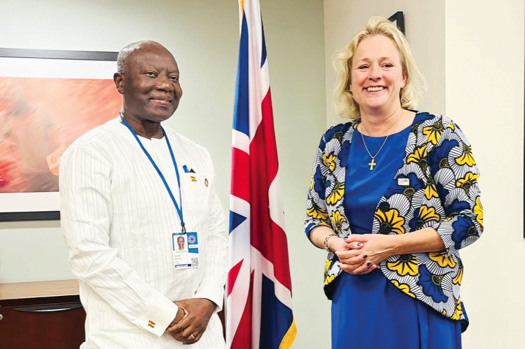 The prospect of Ghana securing an expedited deal with the International Monetary Fund (IMF) has been given another boost, as the United Kingdom (UK), Germany and France have pledged to support the country to deal with its current economic crisis.

These financing commitments came on the back of closed-door bilateral meetings hosted by a government delegation in Washington, DC, USA.

In an interview with the Daily Graphic, the Finance Minister said “Ghana still has great strengths to build on, as our productive sectors are still growing, expenditures are being contained and the formal conclusion of IMF negotiations should support our balance of payments position”.

“Consequently, our bilateral partners are demonstrating increased support for our recovery plan,” he added.

Negotiations with the IMF are set to continue this week as Ghana’s delegation has outlined the broad policy anchors for the government’s flagship Post-COVID-19 Programme for Economic Growth (PC-PEG).

The PC-PEG, referred to in the 2022 Mid-Year Budget Statement as the Enhanced Domestic Programme (EDP), contains a set of time-bound structural reforms and fiscal consolidation measures to place the country’s debt levels and fiscal accounts on a sustainable path over the medium term.

The minister said like many other countries, Ghana was operating amid a confluence of adverse shocks heightened by debt vulnerabilities.

Officials of the Ministry of Finance and the Bank of Ghana opened formal negotiations with the IMF on September 26, this year for an economic programme, necessary to forestall debt default and stabilise the economy in the short-to-medium term.

The negotiations were expected to explore the nature of policies, reforms and programmes that the loan support should entail in helping stabilise the economy.

The results of the negotiations were to form the basis for an IMF decision on Ghana’s request, which would then be submitted to the IMF Executive Board for consideration.

A combination of IMF assistance, structural reform programmes and increased bilateral support were expected to ease existing macroeconomic imbalances over the next few months.

Consequently, the completion of IMF negotiations in a timely manner continues to dominate the government’s agenda.

Mr Ofori-Atta, who is currently in Washington, DC, attended the Annual Meetings of the World Bank and the IMF, met with key bilateral partners and continued negotiations with the IMF for support for Ghana’s economic programme.

The Finance Minister, on October 11, this year, attended the 108th Meeting of Ministers and Governors of the Group of 24 on the theme: “Securing a sustained post-pandemic recovery”.

He also met with the Director for the Africa Department of the IMF, Abebe Aemro Selassie, to advance discussions on ongoing programme negotiations with the fund.

As part of the discussions, it was agreed that Ghana’s negotiated programme must reposition the country towards a resilient macroeconomic environment, while ensuring that the most vulnerable segments of the population were protected from the impact of any potential fiscal adjustments.