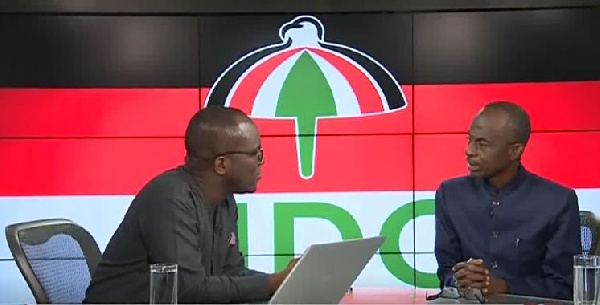 Johnson Asiedu Nketia, General Secretary of the National Democratic Congress (NDC), has questioned the intelligence of Head of JoyNews’ Political Desk and host of PM Express, Evans Mensah over comments the latter made on the Free SHS policy.

Evans Mensah, whilst interrogating Asiedu Nketia asked if former President John Dramani Mahama, has plans to scrap the Free SHS programme if he comes to power as speculated by the ruling NPP government.

But responding to the issue, the General Secretary known for his cheekiness asked the PM Express host if he knew what the word ‘review’ meant.

Framing his question after stating what Akufo-Addo said in Bolgatanga over the policy, Evans Mensah said “you’ve said your leader says he will review Free SHS. What does that mean?”

Asiedu Nketia responded, “Ah so you went to school and you understand review to mean cancelling? No no I’m asking you, do you think review means cancelling?… Review means looking at the thing, finding out what is wrong with it and changing what is wrong to make it right.”

He, however, said former President Mahama has no plans of cancelling the policy but will rather review it to make things easier and accommodating for students.

According to him, the NDC, when given the nod will use 90 days to build about 100 schools and scrap the double-track system.

He further challenged the ruling New Patriotic Party (NPP) government to provide evidence of Mahama saying he’ll cancel Free SHS and threatened to resign from his position if the former president truly made that statement.

“If President Akufo-Addo or any other Ghanaian can produce a recording; either pictorial or vocal recording of President Mahama saying that he will cancel Free SHS when he comes to power and we test it as a genuine recording coming from the mouth of President Mahama, within 24 hours I’ll resign as the General Secretary of NDC. I’ve challenged them, let them bring it,” he said on PM Express on JoyNews.