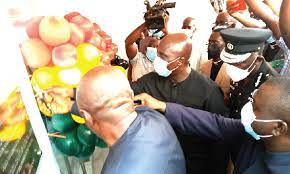 A two-storey building to serve as the headquarters of the Police Professional and Standards Bureau (PPSB) has been inaugurated in Accra.

The construction and furnishing of the building, valued at about GH¢3.9 million, was financed by the Executive Chairman of the Tobinco Group of Companies, Mr. Samuel Amo Tobbin.

It is located on the compound of the Nima Divisional Police Command and was constructed by Toblues Properties Limited, a subsidiary of the Tobinco Group.

The Minister for the Interior, Mr. Ambrose Dery, inaugurated the edifice on behalf of President Nana Addo Dankwa Akufo-Addo yesterday.

President Akufo-Addo, in a speech read on his behalf by the minister, commended Mr. Tobin for the gesture, saying it exhibited the qualities of a private entity that was not only out to make profit from the public but also ready to give back to society.

He said at a point in the history of the Police Service, the public had numerous complaints about the service, with some asking: “Who polices the police?”

To address the concerns of the public, he said, an Inspection Unit was established to monitor and ensure that police personnel were professional and ethical in the discharge of their duties.

The unit later became known as the Police Intelligence and Professional Standards (PIPS) bureau and now the PPSB.

Over the years, President Akufo-Addo said, the bureau had been reactive, rather than proactive, in its operations, as it relied solely on receiving complaints from the public, investigating same and advising the Police Administration for further action.

In relation to its geographical coverage, he said the bureau had mainly operated in Accra and recently expanded to the Volta, Ashanti and Western regions, denying the other regions the opportunity to hold the police accountable and limiting their ability to bring complaints against defaulting personnel.

The President announced that the Police Administration, under the leadership of the Inspector General of Police (IGP), Dr. George Akuffo Dampare, had redefined and initiated strategies to make the PPSB more proactive in ensuring professional standards within the service, prevent instances of unprofessionalism and reduce instances of personnel misconduct.