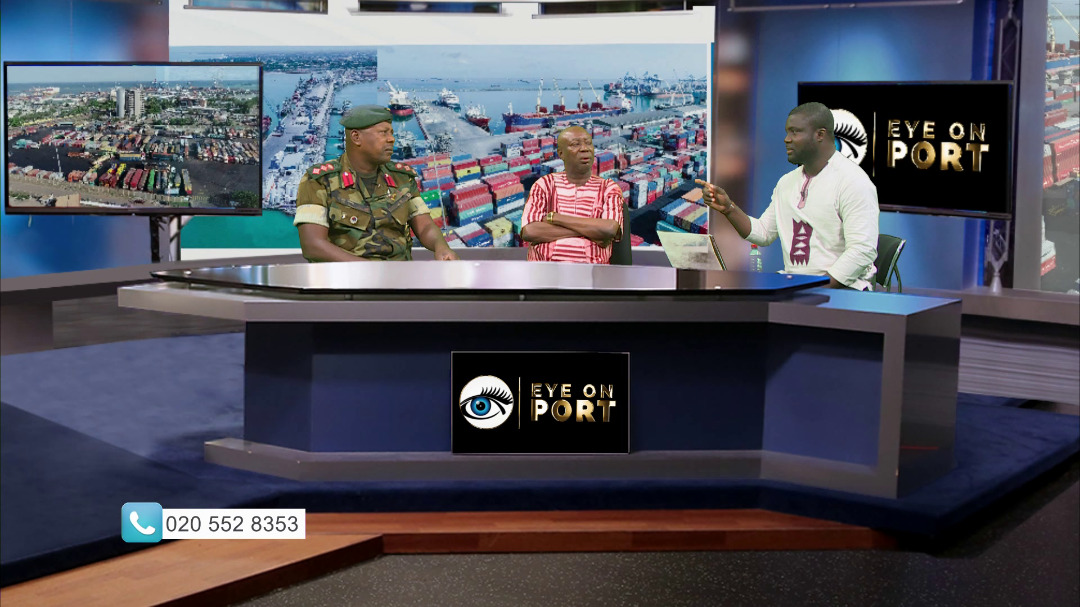 Eye on Port continues to engage key institutions in the port area to bring clarity to port users on issues pertinent to the industry live on national television.

On Eye on Port recent live telecast, featured security at the ports where the National Security Liaison at the Tema Port, Sub/Lt. Christian Tettey, and the Tema Port Security Manager, Lt. Col Joseph Malik Punamane, were engaged to give accounts of their roles at the port.

The Tema Port Security Manager, Lt. Col. Joseph Punamane, said he is in charge of coordinating all security activities in the port as well as advice the Ghana Ports and Harbors Authority on security management.

“My purpose there is to coordinate activities of all security agencies to make sure we have a safe port and aside that, as part of GPHA I provided overall coordination and advice management,” he indicated.

The PSM who is on secondment from the Ghana Army, said he heads a security department of personnel well trained by the Ghana Army.

“Ghana Ports and Harbours Authority, has trained a lot of staff to do security duties. They are properly trained by the military at the Ghana Army Forces Recruitment Centre except weapon training,” he added.

He indicated that security management of the port is a very dynamic task as his outfit serves as the frontline security group maintaining order in the port enclave, intercepting all suspected criminal activity, and issuing passage for only individuals who have undergone clearance procedures by the Authority.

“We control access at the port and make sure that people who board the ship are recognized people. We also encounter and try to avoid instances where people try to open containers and steal from them or even people who try to traffic weapons.”

The Liaison Officer of National Security, Sub/Lt. Christian Tettey, says his outfit is mandated to engage in inspection of goods to ascertain they do not compromise with the country’s laws.

“We are part of the three agencies that take part in examination, that is, FDA, customs and National Security. We provide a lot of intelligence to make sure that clearing agents do not under declare,” he stated.

He said, the nature of his outfit’s work doesn’t require them to wear uniforms but act based on security intelligence with the help of informants and undercover agents.

“We collect a lot information and then we decipher and get intelligence. So if you are in uniform people will recognize you. We also use informants a lot.”

“If we should get somebody involved in these infractions, we hand them over to the police for further investigation and prosecution.”

“When we identify any threat and because we are not armed we inform the security agencies such as the police, navy and the national security in the port and we work together to ensure the safety of the port.”

He said, National Security are not supposed to stop trucks on their route to transit.

Also addressing the issue of individuals who falsefully use the name of national security to harass and extort port users, the National Security top official emphasized that the public, should refuse to engage them, and report them to the Police.

“There are some people going around saying they are national security, which they are not. So if you are an importer and you are moving your goods to a destination and you are being stopped, inform the person you refuse and you would like to go to the police station,” Sub Lt. Christian Tettey stated.

On the story of the 10 diverted containers, which were being supervised and transported to Atlas terminal, from a private container Terminal called Tema Container Terminal, the National Security Liaison set the record straight that his outfit were left out of the escort. He also lamented that such issues of diversion of cargoes is an issue of syndicates who according to him collaborate with some unscrupulous officers in their endeavors.

“This particular issue, was a mysterious transaction. National Security was not copied,” he exclaimed.

He advised that no uncleared container should now be transferred from the Tema Container Terminal to Atlas Terminal until further notice.

The Port Security Manager, Lt. Col. Joseph Punamane who addressed the recently reported stories of stowaways disembarked in Ghana, indicated that these stowaways did not join vessels in Ghana’s Ports as measures have been tightened at the ports to make it almost impossible for a stowaway to succeed there.

“They embark from other ports because our measures are very stringent and we make sure to not entertain stowaways.”

He expressed that offenders do not fully understand the severity of the activity, and advised them not to indulge in stowaway.

“When you board the ship illegally, the ship owner incurs some sanctions and in countries like Brazil, ship owners who disembark stowaways are fined as much as 30,000 dollars,” he revealed.