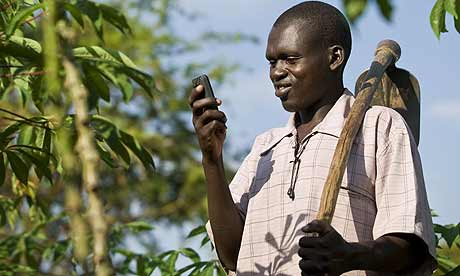 The Minister of State in charge of Agriculture, Dr Nurah Gyiele, has hinted of moves by government to subsidise mobile phones for rural farmers to augment the huge subsidies given to farmers in seed and fertilisers with technology.

He says the move forms part of government’s efforts to improve mobile network and access to internet connections to rural areas towards promoting agri-business.

Dr Gyiele reiterated that the agriculture sector is a priority for government, and, therefore, it would be logical to subsidise mobile phones just like it has done for seeds, fertilisers and agri-machineries, as mobile phones have become a necessary tool for accessing vital information, especially from extension officers, regarding production.

He was speaking at the International Development Research Centre Forum, as part of preliminary events for the 2019 African Green Revolution Forum (AGRF), in Accra.

Digital technology, he added, is very crucial in helping agriculture producers to become more effective and efficient in the whole agriculture value chain.

Ghana is hosting the 2019 African Green Revolution Forum (AGRF) in Accra from today to September 6, 2019, on the theme ‘Grow Digital: Leveraging Digital Transformation for Sustainable Food Systems in Africa’.

Over 2,000 participants, including heads of state, ministers and eminent personalities from all over the world, are expected to participate in the forum.

It is a unique multi-disciplinary forum where delegates discuss and commit to programmes, investments, and policies that can counter the major challenges affecting the agriculture sector on the continent.

Leading to the forum today, the Centre for Agricultural and Rural Co-operation (CTA) yesterday launched the Digitisation of Africa Agriculture (D4Ag) Report 2018-2019.

In the report, CTA recommended to African governments to invest in ongoing training to build the digital and D4Ag skills of individuals, ranging from legislators and ministers to IT leads and local extension agents throughout the agricultural ministries and in other relevant ministries.

They were told to implement farmers’ digital literacy and D4Ag training programmes, with support from the appropriate ministries where applicable and support the start-up eco-system.

Governments were further urged to make direct investments in promising D4Ag models where appropriate, in partnership with private investors, particularly for those agriculture value chains where governments are already active in market support for public procurement.

Additionally, the report recommended to government to attract new investors by publicly supporting D4Ag and highlighting the benefits of local enabling conditions.

The report highlighted the need for donors to increase support for initiatives such as incubators, hackathons, prize competitions, university classes to foster local digital skill development and also earmark funding for capacity building initiatives as a standard condition for grants to AD4g enterprises.

It noted that investments remain small, and primarily fuelled by donors while private investment is lagging and donors are increasingly making D4Ag an important part of their portfolios.

The report estimated that while the sector currently lacks precise quantitative data or evidence on employment impacts, CTA believes that D4Ag will likely be a net job creator, thus opening up thousands of jobs in agriculture technology, DA4g support, agricultural processing and agricultural manufacturing jobs.