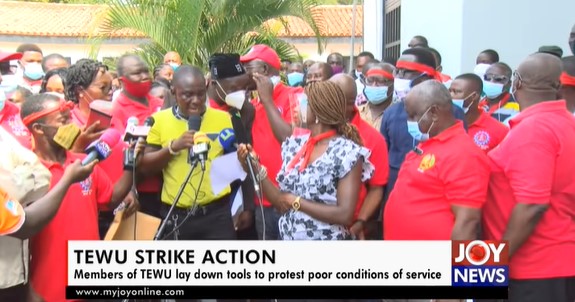 Government has expressed its commitment to address the concerns of the Teachers and Education Workers Union (TEWU).

This comes on the back of a nationwide strike declared by the union on Wednesday.

The industrial action by members was to demand better conditions of service from government.

TEWU says its cannot comprehend that for close to two years, the Fair Wages and Salaries Commission has not been able to finalise issues on its condition of service, while members continue to work under very difficult situations.

The nationwide action triggered an emergency meeting convened by the Fair Wages and Salaries Commission, TEWU and government represented by the Ministry of Finance, Education and Labour Employment Ministry.

At the end of the talks, it was agreed that a job re-evaluation will be conducted for members of TEWU who are exposed to imminent hazards as far as the issue of Risk Allowances was concerned.

The issue of promotions also came to the fore at the meeting. A joint communique indicated that the Secretariat of the Vice Chancellors Ghana (VCG) should convene a meeting of Directors of Human Resources with leadership of TEWU by Friday, 15th January, 2021.

“That in furtherance of this agreement, the Secretariat of the VCG should make available to the leadership of TEWU relevant documents relating to the issue before Friday,” the statement read.

A consensus was also reached to the effect that consultations will be held with the Government on issues regarding Non-basic Allowances.

“On the issue of Non-basic Allowance, consultations would be held with the Government on Certificate of urgency and the outcome conveyed to TEWU as soon as possible,” the statement added.