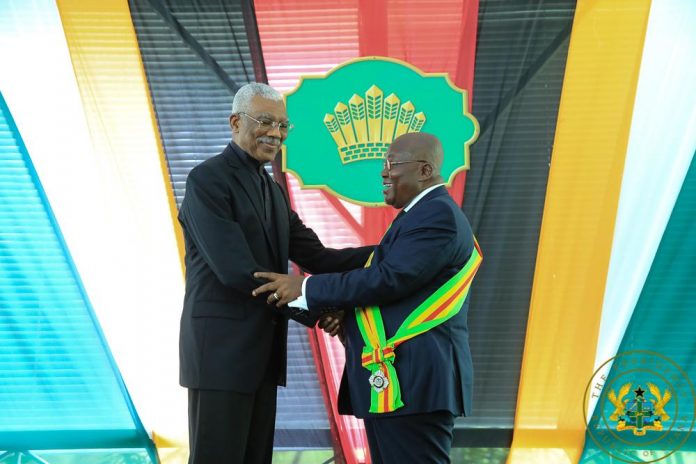 Ghana’s President, Nana Akufo-Addo has agreed that his country would help Guyana’s energy sector, Director-General of the Ministry of the Presidency, Joseph Harmon said.

Briefing the media after Akufo-Addo was conferred with Guyana’s national award, the Order of Excellence by President David Granger, Harmon said the technical assistance cooperation would be provided free of cost.

“This is very important to us because what they did was to commit to pay the salaries, the transportation and everything to get the people here and all that we will need to do is to find accommodation for them,” he said.

Currently, Guyana’s oil and gas sector is being managed by the Ministry of the Presidency’s Department of Energy with the President as the Minister of Petroleum.

Ghana, from where thousands of enslaved Africans were taken to Guyana during the period of European colonisation, is a young oil-producing nation. The two countries also share similar geological, geographical and climatic features.

Harmon said Ghana and Guyana have also agreed to abolish visas for hassle-free entry for up to 90 days by holders of regular passports.

The Director-General announced that several trade agreements were inked by representatives of the two countries during the visit by the Ghanaian President.

Plans are also in the pipeline to have five-hour direct flights between Georgetown and Accra, instead of a minimum of 13 hours via Europe, Harmon reiterated.

President Granger said the Order of Excellence was conferred on President Akufo-Addo for “his dedication and commitment” to the Commonwealth of Nations, Organisation of African Unity, Economic Community of West African States and “for his unflinching support for the rights of developing States” such as those in Africa, Caribbean and the Pacific. “Developing countries look to his continuing leadership and stewardship in the protection of their gains and in securing their future. Guyana regards him as a dear friend and as a brother”.

President Akufo-Addo, in response, said “I am, of course, extremely appreciative and very grateful…and I am very, very concerned about how the two of us and our two countries can work together to promote the welfare and interest of our peoples”.

The Ghanaian President was Tuesday expected to visit the Demerara Distillers Limited and Banks DIH Limited distilleries because the Ghanaians have “an interest in our rum industry”, as well as “our wood” with a view to being sold in Ghana where there has been deforestation.