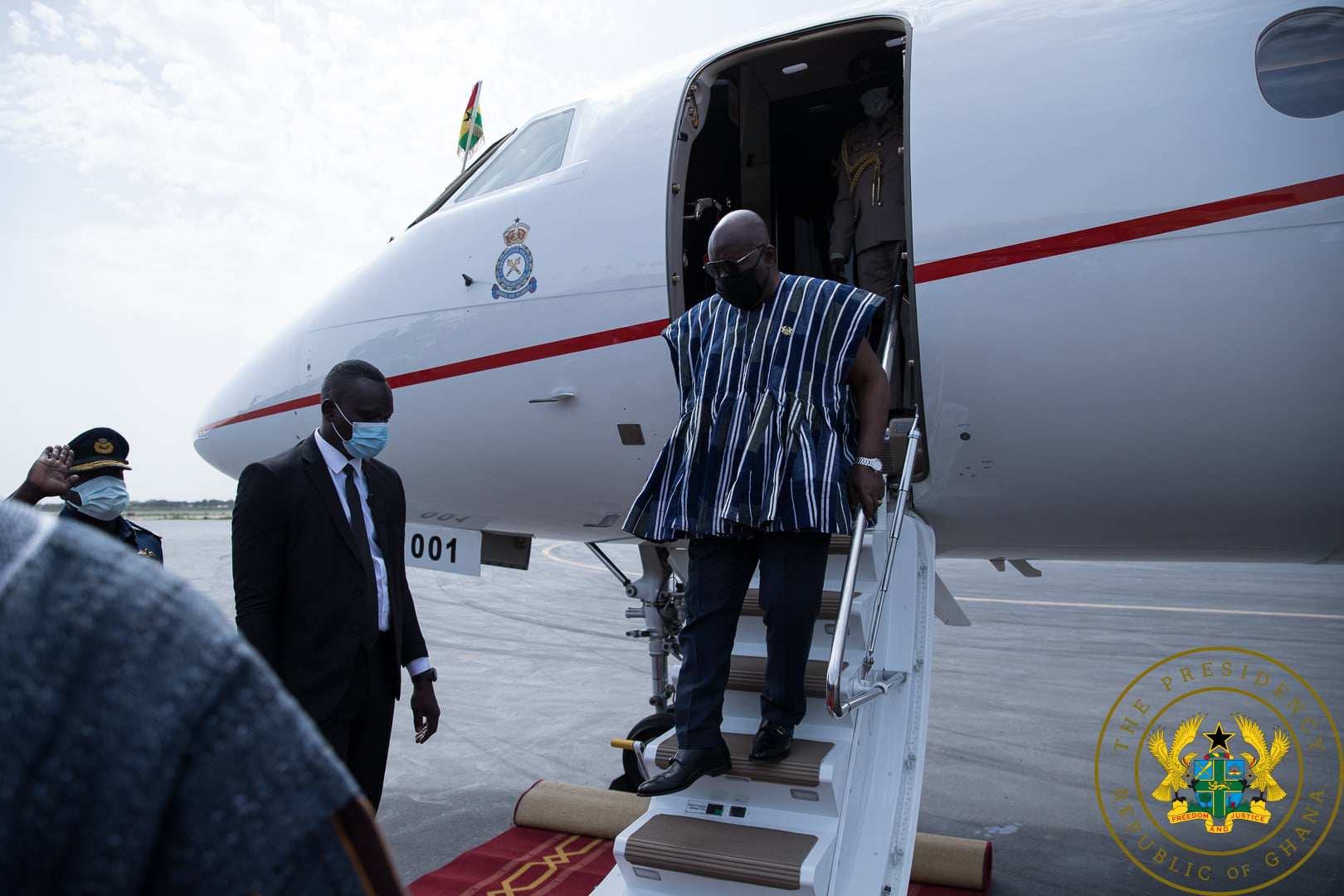 The government has initiated process to acquire and new and bigger presidential jet.

The Minister of Defence, Mr Dominic Nitiwul is handling the processes and expected to announce details later on.

The Director of Communications at the presidency, Mr Eugene Arhin gave the hint a press briefing at the Jubilee House on Monday evening (September 27, 2021).

President Nana Addo Dankwa Akufo-Addo has commenced consultative meetings with ministers of state at the Jubilee House to ensure that they continue to be in tune with his agenda for the second term in office.

The three-pronged meeting also include discussion of their budgetary requirements ahead of the presentation of the 2022 Budget Statement and to assess their work programme for the remainder of the year.

On Monday evening, President Akufo-Addo, who returned earlier in the day from a one-week trip to the United States for the 76th United Nations General Assembly, had met 14 of his ministers.

They were the Ministers of Trade and Industry, Energy, Employment and Labour Relations, Fisheries and Aqua Culture, Public Enterprises, Youth and Sports, Local Government, Decentralisation and Rural Development, Chieftaincy and Religious Affairs and Parliamentary Affairs.
Other ministers are expected to appear before the President today and tomorrow.

Touching on the trip to the US, Mr Arhin said aside from addressing the world body, President Akufo-Addo had meetings with other global leaders on the sidelines.

They included the Vice-President of the United States of America, Mrs Kamala Harris; the Prime Minister of Barbados, Ms Mia Mottley and the President of Guyana, Mr Irfaan Ali.

He added that President Akufo-Addo also held two fundraising activities for the National Cathedral in New York and Houston and met with the Director of the World Trade Organisation, Ms Ngozi Okonjo-Iweala.

Mr Arhin said the meeting with the WTO boss centered on strengthening the Africa Continental Free Trade Area which is housed in Ghana.

The communications director said the US Vice-President commended Ghana for entrenching democratic credentials through the conduct of free and fair elections in December 2020.

She praised President Akufo-Addo for creating a conducive business atmosphere in the country which had led to significant levels of American investment in Ghana.

He said Mrs Harris assured that the US government was willing to extend support to businesses owned by women in Ghana and small and medium enterprise.

Mr Arhin explained that during President Akufo-Addo’s meeting with the Barbados Prime Minister, the two agreed to conclude the necessary bilateral air services agreements and the designation of a carrier to fly between Accra and Bridgetown to open up people-to-people relations.

Mr Arhin noted that another issue that was discussed was the possibility of increasing the number of Ghanaian nurses that had been sent to Barbados.

He said the Barbados Prime Minister indicated that the cultural similarity and the widespread acceptance of the initial deployment of Ghanaian nurses to Barbados had been a good basis to grow that particular cooperation.

He said there was request for possibility of sending Ghanaian doctors to Barbados.

Again,President Akufo-Addo indicated that he would put his Ministers for Health and Transport in touch with the Prime Minister for further discussions on the request.

The President of Guyana, according to Mr Arhin, requested for Ghana’s technical assistance in the oil and gas sector, as well as support for the industry as a whole, while President Akufo-Addo also confirmed the need for the two countries to establish a framework for technical consultation.

He said President Akufo-Addo assured that Ghana had the required capacity for Guyanese trainees in the oil and gas industry.

Mr Arhin said President Akufo-Addo, who had toured 12 out of the 16 regions within this year, was “extremely delighted” as to what was taking place in the newly created regions, especially with the massive infrastructure development.

He said in fulfillment of his pledge to spread development in the newly created regions, regional offices and directorates of various government agencies were being spread in various towns in the regions instead of concentrating all the infrastructure in the regional capital.