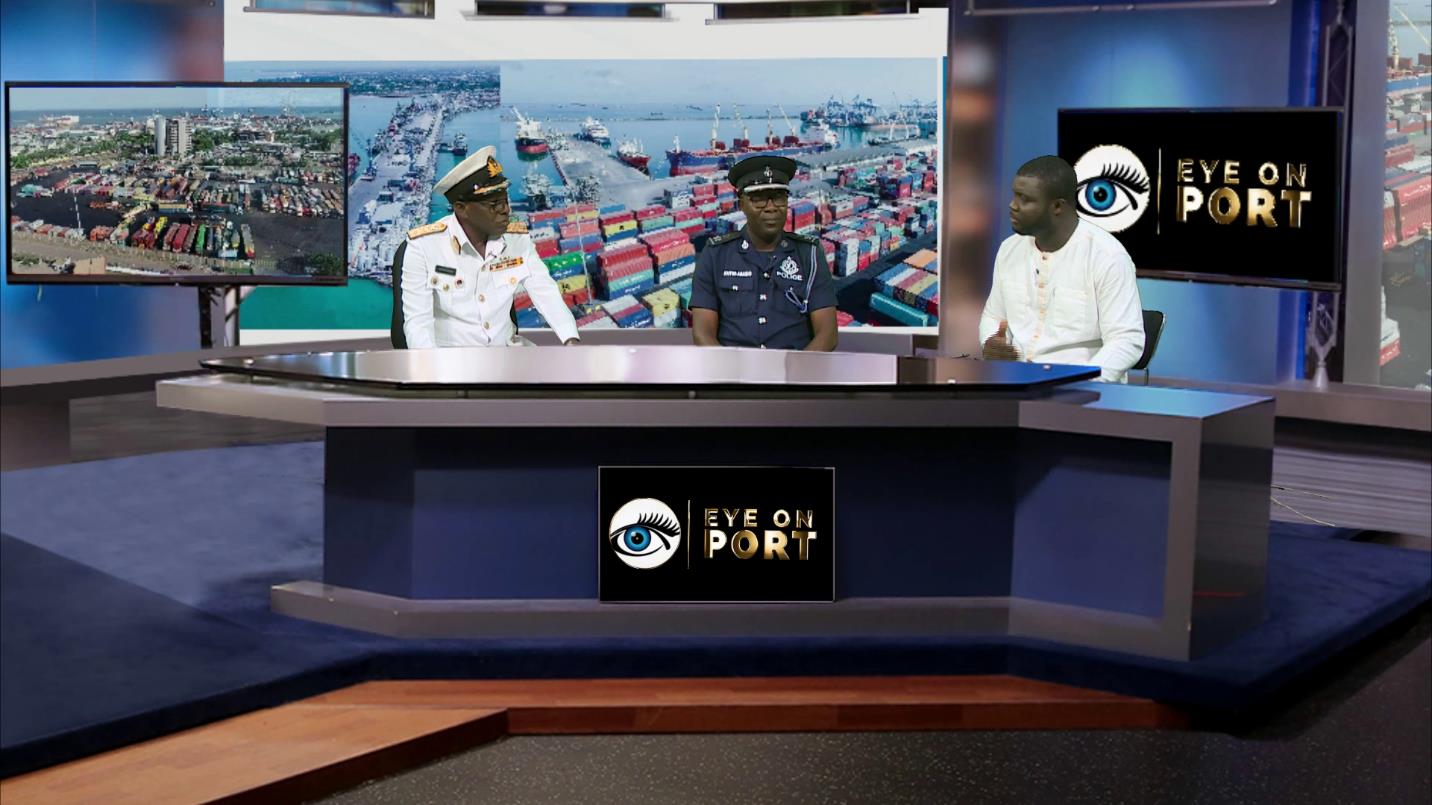 The Ghana Navy and the Marine and Railways Unit of the Ghana Police Service have assured the public of continued service to safeguarding the port space and Ghana’s territorial waters.

This was said when, the Flag officer in charge of the Eastern Naval Command, Commodore James Kontoh and the Commander of the Marine, Port and Railways Unit of the Ghana Police Service, Chief Superintendent Joseph Ababio participated in Eye on Port’s live broadcast on national television, that seeks to bring port and maritime activities more closely to the public.

According to Commodore James Kontoh, Flag Officer Commanding, Eastern Naval Command, said, the navy, is an arm of the Ghana Armed Forces, mandated to keep a presence on Ghana’s seas to prevent the country from potential security threats.

He said, this is done by monitoring, patrolling, and the use of intelligence by technical collaborations with other security agencies that operate within the marine space.

“Previously, every activity was just limited to the port and the anchorage area that prevented us from seeing very far, so there is a huge drive to make sure that at least we are not completely sea blind. We maybe a little bit foggy but we should be able to see and go further. So, we are applying all sort of means in terms of both electronic and surveillance to make sure that we are able to police the sea,” he revealed.

Commodore Kontoh added that, collaborations exist between the Ghanaian navy and the navies of neighboring countries on the Gulf of Guinea, to combat the epidemic of piracy and robbery on sea that has bedeviled the area.

“We are showing presence out there at sea, making sure that we have vessels which are on patrol. And like I said, we have electronic surveillance systems at our Maritime Operation Centers, which are able to give us a lot of information as to what is going on out there. There is also a lot of collaboration with other stakeholders like the marine police and our neighboring countries. For instance, the Gulf of Guinea area has been divided into maritime zones, for us to easily share information pertaining to what is going on,” he shared.

The high rank navy official addressing the key to Ghana possessing a safe marine territory, attributed the success to all other security agencies who help the navy guard our waters, describing them as up-to-task.

“I would not like the navy to take all the credit. First and foremost, we have the Ghana Port and Harbours Authority security team and they are the lead team who take care of security within the port and the anchorage and then we have a joint patrol team, which is made up of port security, marine police, the navy and the national security. Ghana Maritime Authority has also come up with surveillance systems which they share with the navy, so anything going out there they see it and report to the navy and we have vessels that go out there to deal with it.”

Chief Superintend Joseph Ababio, of the Marine Police Unit of the Ghana Police Service, also stated that the Marine space had to be regulated against criminal offences, since it is within Ghana’s jurisdiction. Hence, the Marine component’s incorporation into the Port and Railways Unit of the Police Service in 2008.

Touching on the menace of stowaway, the Port, Railways and Marine Unit Commander, said because it is a misdemeanor offence, it is difficult to apply stringent enough punishments that would be deterrent to other potential culprits.

“Unfortunately the key factor is that the punishment ascribed to the people who commit such offences is very minimal +unless the law is changed. It is a misdemeanor. Now that we are all shifting towards harnessing a blue economy, certain offences that was committed at the sea and within the ocean are been reviewed. As the new laws are being promulgated they would factor some of these offences,” he articulated.

He also hinted of the incessant rise in unscrupulous individuals taking advantage of the port environment to engage in the false sale of vehicles.

“It is almost becoming daily occurrence, where people are using the cyber space to advertise for cars and auctions at the port. I have been saying that in the port itself, cars are not auctioned or sold there. Cars are sold at garages. Many people are being duped in such circumstances where they are lured to the port environment, deceiving buyers, by pointing out cars that they claim belong to them, take their monies and runaway,” he Marine Police commander narrated.

He warned the public that cars are not sold at the port and people should desist from engaging with these people.

He advised also that, in tracking culprits, victims should be committed to assisting the police with all information that would help in their arrest.

“Police is there cautioning and patrolling. But these people who are being duped also have a problem identifying those criminals making it difficult in fishing them out. Quite a shame, because these victims are parting away with as much as 70,000 cedis,” he expressed.

On trade facilitation, the Marine and Railways Unit Commander, revealed the police has eliminated most of the barriers on the transit corridor which is meant to create a harassment free corridor for transittors.

He said, the checkpoints that are placed on the corridors at night are to protect communities from crime, rather than to stop drivers for extortion.

“When you are going through the corridor on day time the barriers are open. In police management some of the areas have snap checks at night because they are armed robbery prone. On the Kintampo – Tamale and the Cape Coast – Takoradi stretch are examples where we have many of these stoppages, but their presence there is for prevention of crimes and not for extortion of money,” he vouched.

However, on addressing callers’ concerns on existing extortions, he asked civilians to refuse paying undue monies to police officers.