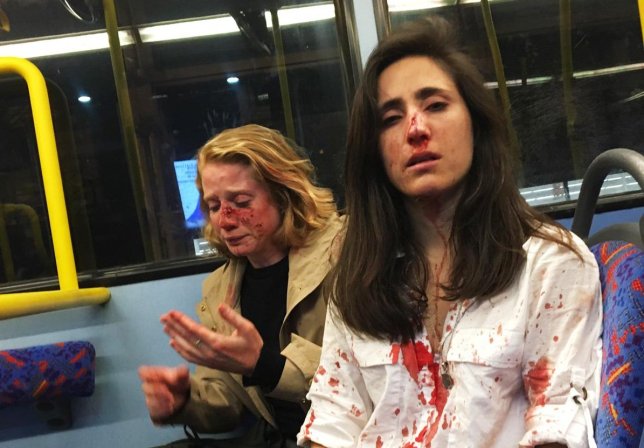 This horrifying picture shows a flight attendant and her girlfriend covered in blood after a gang of men savagely attacked them when they refused to kiss. The disgusting homophobic attack happened on a London bus as the couple returned home from an evening out last month.

Ryanair worker Melania Geymonat, 28, from Uruguay, was left with a suspected broken nose while her American girlfriend Chris was also beaten up. Melania, who lives in Bishop’s Stortford, Essex, said the pair were sat at the front on the top deck because they enjoyed the novelty of the double decker bus. However, during the journey she claims a gang of young men behind them saw they were a couple and started to demand they kiss while making crude sexual gestures.

Melania said: ‘They wanted us to kiss so they could watch us. I tried to defuse the situation as I’m not a confrontational person, telling them to please leave us alone as Chris wasn’t feeling well.’ The men, who were in their 20s or 30s, began throwing things and the couple told them to stop during the attack on Thursday May 30. Melania added: ‘The next thing I remember was Chris in the middle of them and they were beating her. ‘I didn’t think about it and went in. I was pulling her back and trying to defend her so they started beating me up. ‘I don’t even know if I was knocked unconscious. I felt blood, I was bleeding all over my clothes and all over the floor. ‘We went downstairs and the police were there.’ Melania said there were at least four of them and one spoke Spanish while the others had a British accent. The attackers also robbed the couple before fleeing the bus.

Melania, who moved to the UK in February and is on a year’s sabbatical from her medical studies, says she felt safe as a gay woman in London and was stunned by the attack. She released the picture to raise awareness of violence against women and gay people. She is still waiting to find out if her nose was broken in the attack, which happened following a night out in Camden, north London. Melania added: ‘It’s not something isolated, it’s common. We were seen as entertainment, that’s what makes me so angry.’ Metro.co.uk has contacted the Met Police for a comment.