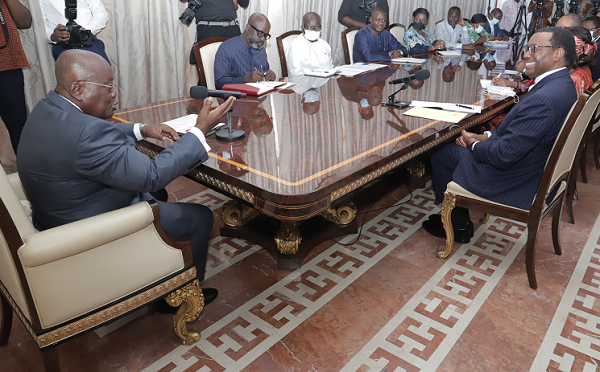 President Nana Addo Dankwa Akufo-Addo has called for greater support for the African Development Bank (AfDB) to expand its capital base to make it the lead financing institution in funding Africa’s development.

He said the bank had proven that it had deeper understanding of African issues, and therefore, must lead in financing African development ahead of the World Bank.

President Akufo-Addo made the call when the President of the AfDB, Dr Akinwumi Adesina, paid a courtesy call on him at the Jubilee House in Accra yesterday.

Dr Adesina, who was on a day’s visit to the country, was at the Jubilee House as part of the preparatory activities towards the Annual Meeting of the AfDB which will take place in Accra from May 23 to May 27, this year.

The annual meeting will also mark the 50th anniversary of the development bank, headquartered in Abidjan, Cote d’Ivoire.

President Akufo-Addo, who is also the champion of the African Union Financial Institutions (AUFIs), said there was the need to offer the required support, and also focus on how to raise more funds from the global capital market to be able lead in the financing Africa’s development.

“The statement that World Bank gives more money and finances more activities than the regional financial institutions such as the African Development Fund (ADF) on our continent is not a comforting one,” the President said.

He stated that Ghana’s hosting of the AfDB meetings and a good number of African leaders who would be in attendance should be used to make the clarion call.

President Akufo-Addo gave the assurance that Ghana would continue to be very grateful to the bank for the interest it had been taking in the country’s development, especially the recent funding for some of its development projects.

He commended Dr Adesina for the great dynamism he had injected since his assumption as the president of the bank, adding that it was evident that the bank had received greater visibility and become an institution that people talked about.

“Ghana is an unconditional supporter of the initiatives that have emanated from the president,” President Akufo-Addo stated.

Dr Adesina, for his part, stated that the annual meeting of the AfDB would help to showcase Ghana and the great progress that the country had made under the leadership of President Akufo-Addo.

“The African Heads of State will see at first hand the great progress that Ghana has made through the support of the African Development Bank,” he said.

He mentioned the $84-million four tier grade-separated interchanges at Pokuase, the first of its kind in West Africa and second in sub-Saharan Africa, as well as the extension of the Kotoka International Airport Terminal 3 project, which had helped to expand passenger and cargo traffic to Ghana.

Other projects that the AfDB had financed in the country, Dr Adesina indicated, included those in agriculture, with the $72-million Savannah Investment Programme, which was transforming the Savannah Region into a bread basket for the country.

“They will hear about the great progress Ghana is making in the cocoa sector with a $600-million loan syndication financing the AfDB provided the Ghana Cocoa Board (COCOBOD),” Dr Adesina added

“Mr President, they will be very happy to hear and learn about the Year-of-Return that your leadership has put in place,” he added.

The AfDB president said the world would also hear again about the Ghana Beyond Aid and Africa Beyond Aid agenda and also send out a new plan for climate resilience and accelerated growth and development for Africa.