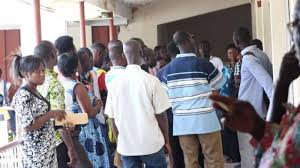 While some were there over the non-placement of their wards in their preferred schools, others placed in day schools far away are requesting for changes.

Some parents, guardians and students expressed frustration with the slow nature of the self-placement process.

According to them, they could not do it themselves and, therefore, needed the assistance of officials of the Free SHS Secretariat responsible for the Computerised School Selection and Placement System (CSSPS) to do it.

The vacancies available for self-placement are 131,146.

The self-placement category is for students who failed to secure places in their selected schools and will now be given new slots in schools with available space.

These students, for various reasons, could not be placed in any of their schools of choice.

When The Finder got to the Black Star Square, parents and wards were spotted looking frustrated while waiting in long queues for their turn to go through the process.

When The Finder spoke to some of the parents, they explained that they had been segregated into two groups: one group comprising people who had come to the centre to find placement for their wards through the self-placement system and the second being parents of wards who were not satisfied with the schools their wards had been given and were therefore at the centre to have their schools changed.

These people had reportedly been told to go home and return on Thursday, but many of them were hanging around.

Student with aggregate 9 not placed

One of the parents who gave her name only as Maamley, and was there to have her son, who had aggregate 9, placed in school because the system did not place him, told The Finder that officials took her name and phone number and so she would be expecting a call from the GES officials .

She said emphatically, “I will not come because they said they will call. If they said they’ll call what am I coming to do here?”

She explained that she had come to the Square a little after 7am and was only attended to after 2pm.

Another parent, who gave her name simply as Becky, was full of praise for the Ghana Education Service (GES) officials as in her words “they have been so patient in explaining everything I wanted to know.”

She explained that she had come to find placement for her son, who was on the self-placement list.

According to her, the GES official who had taken their details “even called someone to tell me about the school. Oh they were very good.”

A girl, Patience Xega, who was at the Black Star Square with her mother, explained to this paper that she was at the centre to have her school changed.

According to her, they had heard conflicting stories about the purpose of the centre so they had come to verify whether they could have their school changed for them.

She told The Finder that though they had been at the centre for at least four hours, they had had no one to clarify issues to them.

A very morose father, Hussein Alhassan, who came from Abossey Okai with his son, expressed his dissatisfaction with the pace of the process.

He had also come to find placement for his son, who had not been placed in his five schools of choice, and had been seated for about two hours, awaiting his turn to speak to the GES officials.

One Emmanuel Ocansey, who was at the centre with his brother, told The Finder that his brother had not been placed in any school so he was there to find out why his brother had failed to get placement and also to secure new placement for him.

Another student, Henry Kwarteng who was there on behalf of his sister, said he had been at the centre since 7am to have his sister’s school changed.

He told this paper, “She did not get any of the schools on her list, so I’m here to change it for her.”

He continued, “They’ve told me to wait. They told me to wait since 7am and that I should follow the queue. I’ve heard that if you want to change your school, you should come on Thursday but I want to verify first. ”

Due to the huge number of people at the centre, GES officials were not immediately available for interviews.

There were also 652 private candidates placed.

A further breakdown indicates that there were 721 secondary schools available to receive the candidates, with 521,298 places available to be filled.

The 2019/2020 academic year has begun with the return to school of students in Form Three.

The first year (Form One – Green Track) students are expected to reopen school on September 15.

Students on the Green Track will be expected to return to school on September 15, 2019.

GES has established a call centre to resolve issues arising from placement, and the centre can be reached on 030-700-7777 for redress.