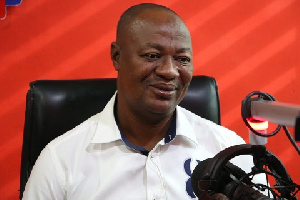 The incumbent New Patriotic Party (NPP) says Andrew Amoako Asiamah, the MP for Fomena is free to rejoin the party if he wins the December 7 elections as an independent candidate.

Sam Pyne, the Ashanti Regional Secretary of the NPP stated on Joy News on Saturday: “If he wins the 2020 [parliamentary election] as an independent candidate, then the rules of the house say that you need to align yourself with one…either the Majority or Minority.”

Sam Pyne added: “I wish he comes in and says ‘I’ve won as an independent candidate but I want to align myself in Parliament with the Majority’”.

The incumbent NPP has stated that it has expelled Asiamah, the incumbent MP for Fomena because he refused to forgo his decision to contest the impending December parliamentary election as an independent candidate.

Asiamah lost the NPP primary for Fomena earlier this year but has since been campaigning as an independent candidate.

After the recent announcement of his expulsion, the party has taken further steps by writing to the Speaker of Parliament requesting that his name be expunged as the NPP MP for Fomena.