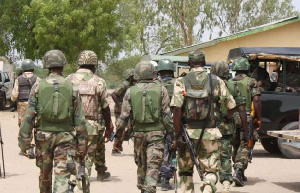 About twelve (12) serving soldiers including a senior officer have been fingered in the foiled coup d’etat and are currently being interrogated over their alleged involvement, MyNewsGh.com reports.

According to sources available to this portal, some of them were actually informants and will be treated as such while others were working in concert with the prime suspect Dr. Frederick Yao Mac-Palm owner of Cidatel Hospital Hospital.

Minister for Information, Kojo Oppong Nkrumah this week dropped a hint that a top military officer and other junior rank soldiers were among suspects in the case.

“There are military persons including an officer who are in custody and being interrogated in connection with this incident,” he revealed on Accra-based Starr Fm monitored by MyNewsGh.com.

Dr. Frederick Yao Mac-Palm owner of Cidatel Hospital Hospital and his two accomplices – Mr. Ezor Kafui (a local weapon manufacturer) and Mr. Bright Allan Debrah Ofosu (aka BB or ADC) are currently in the custody of the BNI over the alleged plot.

Many have given varying interpretations to the claim by government taking into account the type of weapons that have been retrieved from the suspects during last Friday’s raid by the security agencies.

But sources reveal that more implicating evidence is emerging against the three suspects including video and audio recordings.