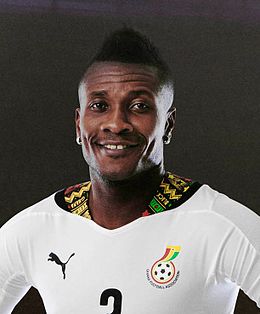 Black Stars captain, Asamoah Gyan has revealed that he takes a lot of inspiration from boxing champion Floyd Mayweather Jnr. and as a result has named one of his three sons after him.

‘’Floyd Mayweather is my role model and it is because of him I named my son Floyed Gyan. Because Floyd Mayweather speaks the truth and when he does, people don’t understand him and publicly condemn him sometimes. But these are hypocrites because in their quite time when they reflect about what he has said very well, then they agree that he has done the right thing’’ he said.

The Blacks stars skipper who said he usually do not want to put his family in the lime light opined that he has three children, all boys, but said he wouldn’t force any of them to play football if they don’t want to.

According to him, he has decided to give his children the leeway to choose whichever profession they want to venture into, stating that they must be allowed to get involved in whatever appeals to them naturally and that he won’t force any of them to play football.