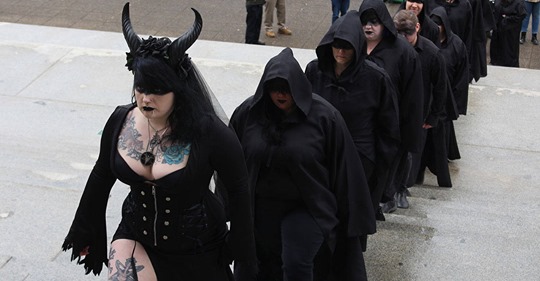 The First Satanic Church which was launched in February this year has now been officially registered in Pretoria, South Africa.

The church’s mission reportedly is to educate the public on the Satanic Religious Board and to address common misconceptions about Satanic practises as well as ease what they term as ‘Satanic panic’ – a general fear that South Africans have of anything that appears voodoo like.

The co-founder of the Satanic church in South Africa, Riaan Swiegelaar, says the registration has been a 4-year process, but has now sailed through.

The church has a council comprising of 7 people dedicated to representing Satanism in South Africa.

Speaking to local radio stations, Riaan Swiegelar said, “When I discovered Satanism by myself, it wasn’t really an organized organization. And there was no representation so I had to find my way, through the dark, so as to speak, till I met fellow Satanists and we became a very close-knit set of people. So it’s important to have a group that resonates with the philosophy and be able to meet”.

According to Swieglar, who grew up in a strong middle class Christian household “the main philosophy of Satanism is undefiled wisdom of oneself and living completely free of the guilt invoked by other religions as a result of natural human instinct”.

Swieglar claims his family hold no grudges and have accepted his choices.

On Social Media, many South Africans expressed shock and fear, while several others celebrated, claiming it was a win for freedom of worship.

South Africa is a secular republic that is meant to guarantee freedoms for all. However, this concept is often misunderstood.

The country’s neighbour Zimbabwe has a specific clause in its constitution that makes it illegal to worship the devil. In the past, the country even had laws that made witchcraft illegal – the Witchcraft Suppression act made it illegal to engage in practises commonly associated with witchcraft, and also made calling anyone a witch illegal.

However, while the witchcraft law as abolished, the satanism law remained, without much resistance.

It is not clear if the Church of Satan in South Africa will look to grow its members, and expand into other countries.