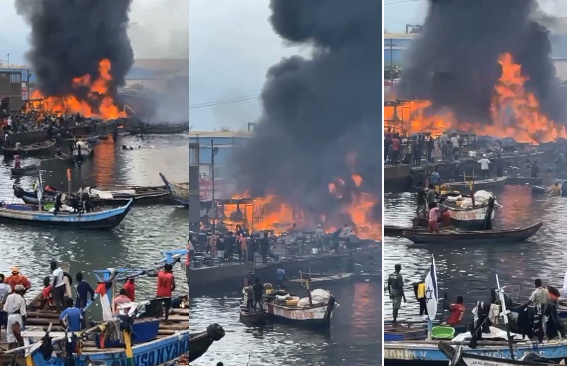 It is suspected that premix fuel being stored at a part of the harbour caught fire. Items that were destroyed included cash, fish and fishing gear.

One person sustained injuries and was taken to the Cape Coast Teaching Hospital for treatment.

According to the Ghana National Fire Service (GNFS), it took about an hour for fire personnel from Elmina, Pedu and the University of Cape Coast to put out the fire.

Divisional Officer II Samuel Sagoe of the Pedu Divisional Command of the GNFS said preliminary investigations indicated that a mobile phone might have sparked the fire that resulted in the inferno.

He asked the harbour community to be extremely careful in dispensing premix fuel and always ensure that there was no naked fire around.

A fisherman and eyewitness, Mr Kofi Gyani said they were unpacking their catch when they heard an explosion and then the fire followed, adding that a lot of personal belongings had been lost to the fire.

He said they as fishermen must all be vigilant to keep the area safe.

The Municipal Chief Executive (MCE), Nana Appiah Korang said some activities of fishermen and fish sellers around the harbour were risky.

“Some fry fish there while some fishermen also keep premix fuel close by and this is too dangerous.”

He said several education on the need for safety behaviours had not been heeded.

The MCE said should persuasion fail, force would be applied.

He said the municipal assembly would work to demolish structures that posed a threat to lives and property.