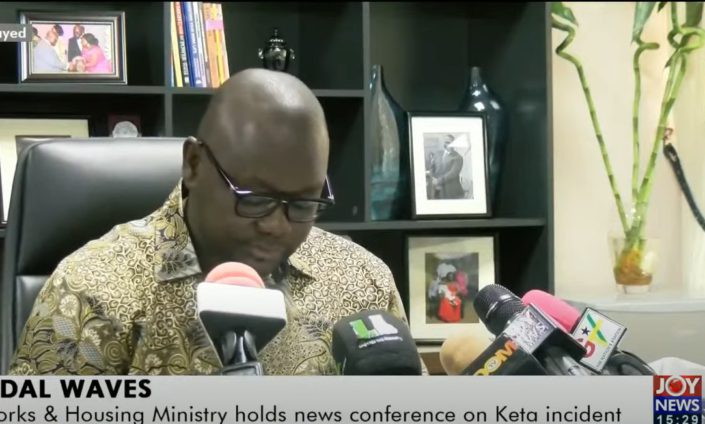 The Minister for Works and Housing, Francis Asenso-Boakye, has disclosed that the Finance Ministry will allocate funds for the construction of the second phase of the Keta sea defence wall.

The announcement comes a day after tidal waves ravaged homes of residents in Anloga and Keta.

According to Mr Asenso-Boakye, the completion of works under the second phase of the project, is expected to cover a minimum coastal stretch of 8km.

He added that the Ministry has finalised the evaluation of the relevant proposals for the construction to begin.

“The Ministry is actively working with the Ministry of Finance to raise the needed funding for the implementation of the second phase which will protect the beaches, lives and livelihoods,” Mr Asenso-Boakye noted.

This year’s waves have affected many households and individuals, mainly displacing many residents and destroying fishing accoutrement, livestock, and other valuables.

Even though the ravages of tidal waves are not new to the Keta coastline, the damage this year has been enormous, disrupting major economic activities, affecting women, children and other vulnerable people in these communities.

Residents of Dzita, Agbledomi, Atiteti, Agokedzi, and Fuveme in the Anloga district of the Volta Region have been displaced. Also, Properties running into thousands of Ghana cedis have been destroyed.

A similar occurrence in March, 2021 left residents homeless and jobless, and schools closed down.

Meanwhile, the Works and Housing Minister said after the disaster in March, a team from the Hydrological Service Department engaged residents, leaders and DCEs to assess the situation and gather needed information for the construction of the sea defence wall.

“I wish to sincerely empathise with our people, whose properties worth a fortune, have been ravaged following this unfortunate incident. I must reiterate that government acknowledges the urgent need to permanently address the devastating effects of tidal waves in the affected towns,” Mr Asenso-Boakye said.