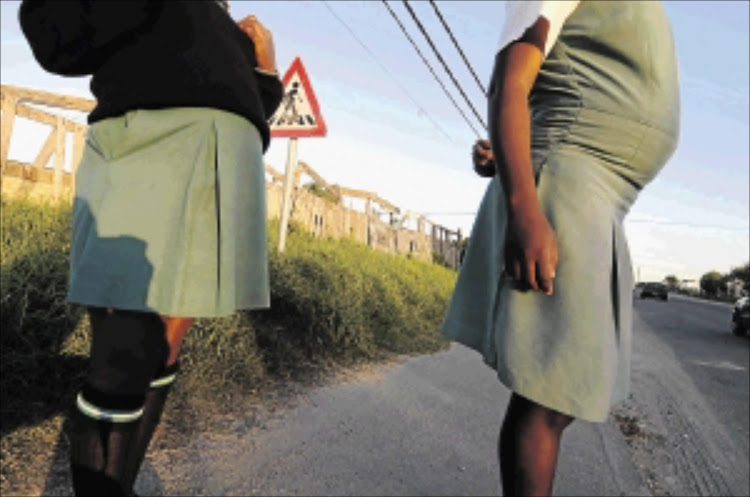 A teacher at Gyekiti Presbyterian Junior High School in the Asuogyman District of the Eastern Region Eugene Akolongo has impregnated a 16-year-old form three pupils at the school.

According to reports, the development is not new at the school and in the community.

The victim is currently three months pregnant. School Authorities and Family of the victim are attempting to cover up the incident to avoid punishment for the teacher.

Starr News Eastern Regional Correspondent Kojo Ansah visited the family house of the 16- year-old girl under the guise of working with an NGO seeking to help girls in such situations. It was established that the teacher has be fined Ghc5000 by the family which he is paying in installments.

Grandmother of the victim told Starr News she doesn’t want the suspect’s teacher to lose his job hence the amicable settlement but warned she will be forced to report to the Police if the teacher breaches any part of the agreement reached.

The scourge of teenage pregnancy involving some teachers in the Gyekiti Presbytery JHS has infuriated the youth in the community who are threatening to unleash violence on teachers notorious for that moral indignation and despicable act.

“It is nauseating my brother, teachers in Gyekiti Presby JHS are sexually abusing the girls particularly the fine girls. At least six school girls have been impregnated by some teachers. Others too have given birth and have dropped out. We the youth in this community wanted to attack and beat the teachers to stop that behavior but we were stopped by leaders in this community ”

Residents are calling on Ghana Education Service to transfer en-bloc teachers in Gyekiti Presby JHS and replace with them those with high moral integrity.

Queenmother of the Anyaase,Nana Anima Okomasan III , a nearby Community where one of the current victims lives said the community needs library to keep the children busy with their books to curb the high rate of teenage pregnancy.

The Headmaster of Gyekiti Presby JHS, Madam Doris Akrade, refused to speak on the matter on basis that the Journalist failed to seek permission first from GES before carrying on with the investigation.

Asuogyaman District is among districts with a high rate of teenage pregnancy. Headteacher of Mamproase Basic School, William Yaw Sarpong, in 2017 revealed that only one female was able to complete JHS and SHS in the area as the rest got impregnated and dropped out.

Speaking at a feast organized for workers and inhabitants of Anchiansa Community by a California-based Ghanaian businessman, Daniel Nte, also Owner of Muzuu Farms, in 2018, a Circuit Supervisor with the Asuogyaman District Education Directorate, Solomon Addo said, a total of twelve (12) School girls were impregnated and dropped out of school during the year.

“They don’t have a lot of school learning materials so they have to go to the bush to cut firewood, sell and then get money.”

He continued: “Another problem we are facing is that the young men in the community are disturbing the girls too much. We have as much as 10, 11, to 12 young ladies who have given birth to date.”

He said all efforts to get them to go back to school proved futile, saying “once they have given birth they don’t want to go to school.”

National image of the Menace

National data gathered by Education management Information System of the Ministry of Education indicate that 7,575 girls in basic and senior high schools terminated their education due to expected pregnancy.

The 2016/2017 academic year figure shows that 1,444 girls in the primary dropped out of school as a result of pregnancy whilst 5,254 and 877 in the Junior High Schools (JHSs) and Senior High Schools (SHSs) respectively.

The Deputy Minister of Health,Tina Gifty Naa Ayele Mensah revealed during the maiden edition of the Marie Stopes Youth Advisory Board Parliament on Sexual and Reproductive Health and Rights (SRHR) at the Parliament house in Accra in May this year , said government is very much concerned about the high teenage pregnancy and adolescent childbearing rates – which is currently at 14.2 percent .

“Ghana’s high teenage pregnancy and adolescent childbearing rates which stands at 14.2 percent and 66/1000 adolescents respectively, are a great concern to the government of Ghana. Indeed at the recent inauguration of the National Population in March 2019, the President of the Republic His Excellency Nana Akufo Addo, lamented the high fertility rate among girls who should ordinarily be in school and charged the National Population Council to work with all the relevant institutions to drastically reduce teenage pregnancy, she said.

She added that, the Ministry of Health, through its implementing agency, the Ghana Health Service, has developed a comprehensive adolescent health service policy and strategy to help improve the mental, nutritional and sexual and reproductive health of adolescents and young people in the country.