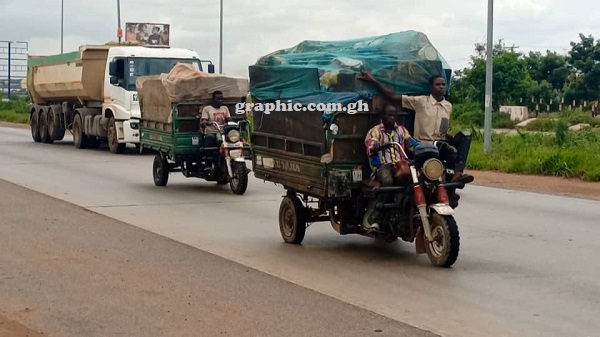 A combined task force from the Tema Metropolitan and the Tema West Municipal assemblies in the Greater Accra Region have begun an exercise to arrest and prosecute operators of motorised tricycles, popularly known as ‘Aboboyaa’, for flouting regulations restricting them from plying the Accra-Tema Motorway.

The task force, jointly led by the chief executives of the two assemblies, Mr Yohanes Amarh Ashitey and Ms Adukwei Addo, respectively, accompanied by some policemen and city guards, mounted check points along the Tema West and the Tema stretch of the motorway yesterday, where offending operators were stopped and their tricycles towed to the police station for further processing.

As of 11 a.m. yesterday, eight motorised tricycles had been confiscated.

Some of the offending riders were conveying bags of sachet water for delivery to clients in their tricycles, while others were loaded with iron rods heading to building sites.

Speaking to journalists, the Metropolitan Chief Executive for Tema, Mr Ashitey, said riding the tricycles, especially on the Tema Motorway, was a major nuisance on the expressway, hence the directive from the Greater Accra Regional Coordinating Council (GARCC) to halt the practice.

He said most of the tricycles, aside from not being roadworthy, were unable to meet specified speed limits on the motorway, leading to accidents on the expressway.

Mr Ashitey said some refuse-collecting tricycles, popularly known as ‘Borla taxis,’ deliberately dumped refuse along the motorway when they got stuck or observed that no one was watching them.

He said the TMA, in collaboration with the police, had intensified the monitoring exercise on the motorway to check the practice, warning that offenders would be prosecuted.

The MCE said all the assemblies in the region had transfer stations to manage waste generated in the municipality and also curtail the indiscriminate disposal of waste.

Mr Ashitey, therefore, advised ‘Borla taxi’ operators to fall on their respective assemblies to dispose of their refuse, instead of plying the Accra-Tema Motorway to access the Kpone Dump Site.

The GARCC has said it will ban all motorised tricycles from plying major highways in Accra from February 1, 2022, but the ban from plying the motorway took effect from last Monday.

The restriction, according to the Greater Accra Regional Minister, Mr Henry Quartey, had become necessary due to the high rate of “gross indiscipline” on the roads by motorcycle and tricycle riders which endangered other road users.

Last Monday, some tricycle operators who cart refuse to the Kpone Landfill Site described the ban and the restriction to localities as a situation that would leave so many Ghanaian youth who relied on the tricycle operation without their livelihoods.

Those who spoke with the Daily Graphic at the Kpone Landfill site said the motorised tricycles business had become a means of sustenance for young people who were unemployed, adding that it had created more jobs for the youth.

Abdulai Kadri, who rides his tricycle from Adenta to the Kpone landfill site, said although concerns about road safety were in the right direction, it would be useful if the riders were trained and licensed to ensure safety on the highways.

He noted that a complete ban on their operations would further compound challenges the average Ghanaian youth faced, particularly joblessness.

Joshua Adjei, another operator, corroborated the ban and its impact of job losses, saying it could even trigger a hike in the crime rate.

Responding to concerns about some of the operators dumping refuse along principal streets, Mohammed Issaka, another tricycle operator, said the city authorities should register the operators and introduce a colour-coding system to differentiate tricycles engaged in carting refuse from those put to other uses to facilitate proper monitoring to track the polluters and other offenders.

Meanwhile, the Kpone Landfill Waste Pickers Association have said banning tricycles from using the motorway and restricting the ‘Aboboyaa’ to specific localities will deny its members access to recyclable materials, a resource on which they depended to survive and feed their families.

The President of the association, Mr Joseph Doe, told the Daily Graphic that when the directive was implemented, it would be difficult for members to access recyclable materials because the tricycles dumped on a daily basis, while the refuse trucks took some days before showing up to dispose of refuse, from which the members of the waste pickers association picked the recyclable materials.

He called on the government to find ways to support the tricycle operators and integrate them into the waste management system to ensure that the youth who were struggling to make ends meet were helped to generate income to sustain themselves and their families.