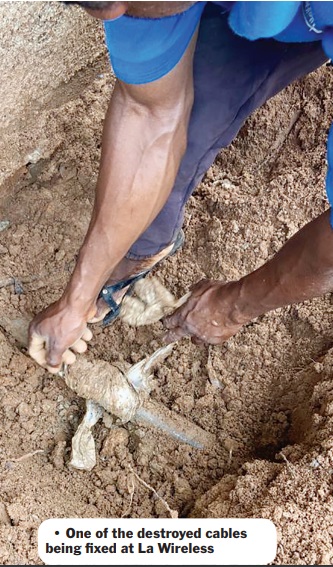 The Ghana Civil Aviation Authority (GCAA) is losing some of its sensitive installations in Accra, including cables used to direct pilots during landing and take-off.

This is due to increasing attacks on the authority’s properties in the La Nkwantanang and the La Dadekotopon municipalities.

Among the installations are the main signal-receiving station near Madina and the signal-transmission station at La Wireless.

Underground cables, made up of electricity, communications and aeronautical, which serve the two stations have either been dug out or cut by encroachers who are putting up buildings on lands reserved for aviation activities.

“The activities of these encroachers on sensitive aviation lands are gradually becoming inimical to the safety of flights coming into the country, with sometimes air controllers losing direct communication with pilots finding a route in the country’s airspace,” the Director-General of the GCAA, Charles Kraikue, told the Daily Graphic in an interview last Tuesday.

“As soon as an aircraft enters our airspace, the controllers need to start communicating with the pilots, so that we avoid collision. Some of the cables being cut are electricity, communications and aeronautical wires. Sometimes an aircraft will be in the air and communication will break, which is dangerous,” he added.

The Madina and the La Nkwantanang stations house communications equipment (receivers and transmitters) that collect and transmit signals on aircraft in the country’s airspace to air traffic controllers at the Kotoka International Airport (KIA).

Based on the signals or information, the air traffic controllers are able to communicate effectively with pilots in order to guide aircraft to avoid collision and ensure safety at all times.

Mr Kraikue indicated that frequent communication disruptions between pilots and air controllers could erode the gains made in aviation safety over the years, after the country had obtained Africa’s highest score in Aviation Safety Oversight in 2019 conferred by the International Civil Aviation Organisation (ICAO).

He said poor performance in aviation safety had a negative impact on the general aviation economy because commercial airlines would be hesitant to use the airspace.

It would also affect revenue for the government, the GCAA and the Ghana Airports Company Limited (GACL).

“In the past month, we had three incidents of cable cut off our sensitive installations. We have reported the matter to the police and the National Security to assist in protecting that portion of the land,” Mr Kraikue said.

He added that 650 acres of GCAA land at La Kwantanang had been reduced to 50 acres as a result of encroachment.

He said despite measures put in place by the authority to safeguard its properties, the illegal acts still prevailed.

The GCAA Director-General indicated that the authority would, henceforth, surcharge developers who damaged its properties.

According to him, the incidents intensified recently, with the GCAA reporting three separate attacks last August alone, disrupting communication between pilots and air traffic controllers.

Mr Kraikue said the last incident occurred in the week ending August 26 and involved the excavation of cables that were buried in civil aviation reserved signal lands at Madina.

Subsequently, the authority had reported the incident to the National Security and the police to assist in the protection of the affected aviation installations, he said.

When the Daily Graphic visited the two stations on August 30, it noticed that construction works which were harming aviation installations were ongoing there.

Underground electricity, communications and aeronautical wires had either been dug out or cut by the private developers putting up buildings or fence walls near the stations.

At La Nkwantanang, the road leading to the station was gradually being encroached upon, while most of the signal-receiving poles mounted had also been destroyed, with others fenced by private developers claiming ownership of the lands.

At the entrance of the station, the Daily Graphic was greeted with a loud noise from a standby generator which was meant to supply electricity in case of power outage from the national electricity grid.

However, due to cable cuts, which had affected power supply, the generator had been running for some days, the reporter was told.

A power engineer of the GCAA, Henry Pobee, said the authority had been fuelling its generator at extra cost for a couple of days now to be able to provide reliable supply of electricity in order to keep the station working effectively.

“The generator is just meant for emergency, but we have to run it for about a week because the private developer and the contractor have still not been able to fi x the cable that was cut.

“And this comes at an extra cost to the authority because we need to fuel the generator in the morning, afternoon and evening to be able to get constant electricity supply,” Mr Pobee said.

A company allegedly engaged by a private developer to build a fence wall on a portion of the land about two minutes’ walk from the GCAA station had delayed in fixing a cable it cut.

The foreman on site, who gave his name only as Eric, said the cost involved in fixing the damage was the main reason for the delay, but said the company was in the process of raising funds to undertake that work.

“We initially thought it was something small which could be fixed in a day, but when the contractor brought the bill and it was above GH¢15,000, we had to look for additional funds to be able to pay,” he said.

He said the damage to the cables was just accidental.

An international aviation expert, Sean Mendis, said the attacks on the installations might not be deliberate but a mistake on the part of the developers.

“I cannot see any reason someone would cut those cables to break the system. These are critical systems used to provide the services that keep planes controlled in the air safely,so while on their own they do not necessarily create a direct danger to flights, the loss of these systems erodes the safety margins that are important for reliable operations,” he explained.